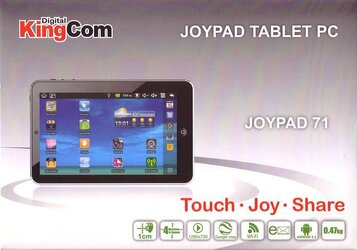 ​
Hello Everybody and Hello from the Philippines! I am a new Android OS Tablet PC user (soon to be developer).


"I'm New to the Android OS but Not New to Linux OS..."
​
Ok, I bought a GENERIC Tablet PC running Froyo 2.2 and I'm back to hearing the words "Supported" and "Not Supported", like I was constantly hearing, day in and day out, when I first was using Linux, almost 14 years ago.

About an hour or so ago, I was adding new links to my blog, and I decided to select AndroidTablets.net as my "external" forum. Last year, I decided to cut down on the number of forums I'm registered with, because I don't have the time anymore. Hopefully, my choice to be on this forum is a good choice! I typically patronize only my blog, yet I'm just using it for "presence" as I no longer enjoy blogging!

Though I'm a researcher, I've been getting a lot of mixed and unverified information about what Android is in relation to Linux. From my own observations, it looks like Android OS is an "overlay" over Linux as Mac OS X is an "overlay" over FreeBSD. Anyone here that's more familiar with Android OS: Please correct me... Thanks!

My New Android OS Tablet PC... As an Embedded Systems Programmer, I look at my new gadget/toy as an embedded system awaiting for me to make it better. I guess, once I get the datasheet (if available) for the WonderMedia WM8650 CPU, I could probably make my 2 Gigabyte device do other stuff. My ideas did cause my wife to panic!

Many Apps/Services aren't supported on my device:

The "Not Supported" messages I get are like the same ones I've been hearing when only Microsoft Windows was the only supported operating system. An example of that was with my Apple iBook G4, running a PowerPC processor... (Developing with XCode solved those "Not Supported" messages.) And now I have a "customized" version of the Android OS and developers are too quick at saying "we don't support your device" rather than explaining what's needed for the product to be "supported".

If the support issue is because "Google requires authorized versions of Android OS to be installed onto only authorized hardware", then that's like Microsoft telling Compaq to install only Microsoft software or else they won't support the hardware (1998 case).

Well, my first post on this forum is a long one... Sorry if anyone's offended! I'm using fring... Add me, I'm known as KuyaMarc. Visit my profile here for other contact info. Have a nice day, everybody!

Marc
You must log in or register to reply here.

M
hello from the philippines