How I Partially "Fixed" the "Internal Storage Unmounted" in 8048

They suggested me to share this info, so i hope it helps someone out there. i'll try to give detailed steps on what i did since i got my Coby 8048.

Coming from others devices i surprised myself to find that the coby tablets don't come with the Play Store, that is why after a bit of research came up with this site. All the things i did where awesomely done by Vampirefo.. everything is out on the open in this forum so i wonder how it worked for me but not for others.

This helped me to get the Store working. it used to (it's been a few hours and didn't happen again.. but it's tricky) act strange sometimes... making all the apps incompatible.. even those that had already been installed and wanted to update. My fix was to delete all the accounts from the Play Store, and add them again. That makes the framework apk force close and update (?) how the apps are filtered and made them re appear.

Up till now i couldn't log-in via the youtube app because the Play Services were missing.

Today while i was in Pinterest (random app), and downloading a Photo Widget i realized i couldn't search for a photo because the gallery stated "not storage found" or similar. i Checked through the wallpapers and same. Checked in storage through settings and only had as "internal Storage" only 1.50GB (i had 4GB). Long story short, something made the Internal Storage Unmount. Unfixable.

Couldn't flash, did hard reset, dalvik, cache and so on. Nothing.

Finally used an SD card from another phone and copy the 8048 Recovery from Vampirefo (never did a recovery from mine.. just because it's easy to flash, and i don't have that many things to loose if something goes wrong.. never thought it would be the sd).

The device recognized the External SD correctly and via CWM i could flash the Zip. After that i have now two "intenal storages" as seen in the screenshot. Also, it already had the Play Services installed which was a plus for me.

I'm not going to ask how this happened.. i still don't understand. But it's better than nothing. Now i have 1 of 1.50 and the other 1.35. Still some gigabytes missing or maybe they are used in the OS, i don't remember exactly the distribution. 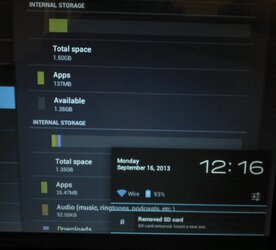 After taking the External SD a notification popped out which i couldn't remove but luckily it was long gone after rebooting the system. Still with both internal storages. the end for now.

Any questions i would be pleased to answer if i can.

Apologise for my long speech. Just follow the links and that's it.
Last edited: Sep 16, 2013

Great that you shared this! Oops I think you meant Vampirefo.

Hey will this work on mid7048-4? Same problem wiith me

oh my jesus christ! sorry for not answering, this forum doesn't have email notifications and i totally forgot to check.. thought that no one would read it

i'm so so happy it worked for your model!, did you recover all the SD or just part like i did?? would love to hear the details.


UPDATE: In reality is my mom's tablet, not mine... i'm telling you this because she reads a lot and that's pretty much how it is used. Today, while reading, the screen blackout without noticed and couldn't turn it on. The tablet didn't respond at ALL. After a bit of research, i found that there was a reset button near the usb port (haven't even noticed that). That fixed the "turn on" part. It reseted BUT without the SD. I did all the steps mentioned before and it fixed again.. so, i don't know if it was random or this fix is temporary. Would love to hear from someone if this happens to others too. heads up, this stills work if you can't change your tablet... also because it can happen to the new one too.

So recently I thoug I'm having it fixed , suddenly
Cwm
Mount and storage
Mount nand
Then error mounting nand.


Sent from my MID7048 using Tapatalk

I foorgot no prooblems on sd ext justt on NAND

The zip is a saved OS, you could say is a nandroid. So you said you want to restore a previous nandroid? Take in mind that i don't know if doing that will corrupt the SD again... if it was backedup when the problem was there. Anyway you don't install a nandroid from Mount and storage, but from Recovery. If the option isn't in the main CMW screen is in Advanced.

EXT Sd is not my problem my problem is the NAND. They said editng vold.fstab is the problem. I didnt touch the vold.fsgab i need a nandroid backup. Flashable stock rom. Or like. Very far from the topic

Sent from my Flame2 using Tapatalk

eaking007 said:
EXT Sd is not my problem my problem is the NAND. They said editng vold.fstab is the problem. I didnt touch the vold.fsgab i need a nandroid backup. Flashable stock rom. Or like. Very far from the topic

Sent from my Flame2 using Tapatalk
Click to expand...

Try this, it will check your partitions.
open a terminal. At the prompt type:

so it seems that dev/block/nandi gets mounted to /mnt/private .... how to fix?
You must log in or register to reply here.