The Lenovo A10-70 is, when you come down to it, a fairly generic tablet. Youd have to look carefully to pick it out of the crowd of other 10-inch models. Like them, its essentially a large black slate with curved corners.

The most distinguishing feature is its speakers. Unlike a lot of its rivals, which put the speakers on the edges of the device, the A10&#8242;s are right up front, in two long bars on either side of the screen. This is important, because one of the tablets major selling points is its sound system. While most tablets have fairly weak audio, Lenovo put in a bit more effort into the audio capabilities of this model, both in hardware and software. 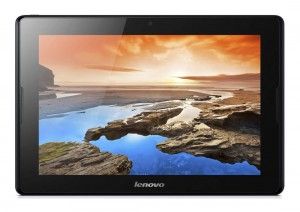 Otherwise, the biggest distinction is the rear casing, which is either dark blue or light blue depending on the version, rather than the usual grey or black. Its plastic and a bit smudgy, but not excessively, so only the slightly obsessive-compulsive might find it annoying.

Overall the build quality of the A10-70 feels decent. Its not built like a tank, but compares favorably to many of the Samsung tablets.

At 1280 by 800 pixels, the A10-70&#8242;s screen is admittedly a bit of a throwback to the resolutions youd see on a high end tablet two or three years ago. That said, and even though youd usually only find that resolution on a low-end 7-inch tablet today, that doesnt make it a bad screen.
The detail is not as fine, and colors not quite as punchy as youll find on a more expensive device. And its not super-crisp like the latest and greatest tablets, including some 7-inch models with prices comparable to the A10.
But pixel density isnt everything. The A10 is one of the least expensive models to have a full 10.1-inch screen, which also counts for a lot. For watching video, reproducing a full magazine or document page, or even just browsing the Web, sometimes size is more important than sharpness.
A 10.1-inch screen has a lot of uses, and the A10-70 is one of the least expensive devices in that category, which also counts for a lot.

Its a compromise: price vs. resolution. You can certainly find new 10.1-inch tablets with higher resolution displays, but not for $250.