I was bored, and turned on my tab, and saw the notification that there was an OS update. I installed the update and let it reboot as it wanted..

Then I did the Power/volume-Down thing to see if I could reset everything, and I didn't get the startup selection screen! So I pressed the Power button for a few seconds to try again, and somehow the tablet rebooted again.

After a few seconds I saw the little flower animation thing, and thought "This looks good."

It was. The tablet started finally, and finished at the usual Home screen.

There doesn't seem to be much information about what improvements there are, if any, but the screen, so far, seems to be reacting a little better than before.

I hope I didn't scare anyone, but that's really how my tablet worked after the update, wit the "no command." message and the dead android. My old Nexus 7-2 has that message on the screen if you turn it on, and it is truly dead.
Last edited: Jun 26, 2014

Mine updated and rebooted normally a few minutes ago when I turned it on. I never got the "no command." message, but it does seem more responsive since the update.


But the update was worthless.

I don't see anything different in the way it works- specifically, the screen. After a week or two, the screen is just as insensitive as before.

Music said:
Sorry Google.... But the update was worthless.
Click to expand...

A security update may not be noticeable, but it probably wasn't "worthless".

An unexpected treat came zooming out of Google HQ today as Android 4.4.4 OTAs and factory images have started rolling out for Nexus devices. The changes have already been posted to AOSP and Al Sutton quickly followed up with a list of the changes that make up the latest update. Since 4.4.3 is only 2 weeks old, and I/O is merely a week away, we had a feeling this was just a security update, and it looks like that's all it is. 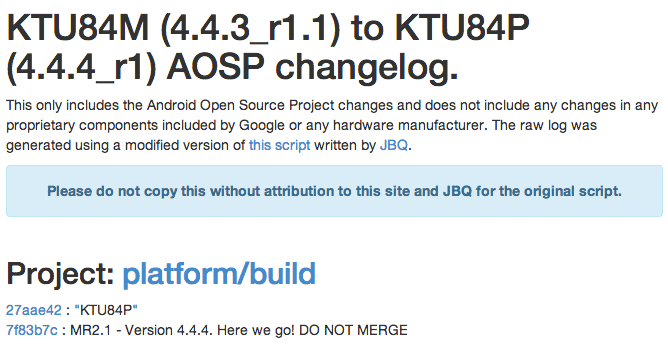 ​
Most of the significant changes are centered around fixing a recently discovered vulnerability in OpenSSL. The side effect is a few tweaks to the OpenSSL, WebView, and Chromium projects. There are also a couple of small tweaks to fix some unrelated bugs in logging and security.
The lion's share of changes went to the platform CTS (Compatibility Test Suite), but that is only used to verify a device firmware is operating within Google's guidelines for Android, so this code never actually makes it to your device.
All in all, this is a pretty minor update. Still, it's making our devices a little less vulnerable, and that's rarely a bad thing. If you're interested in skimming through the changes for yourself, head over to Funky Android!
Thanks, Al!

Thanks. I was hoping the screen would start working right.

I was getting a "no command." message when booting or trying to do the factory reset, so I let it sit in a drawer until the battery was good and dead(since February?)

But I was bored today and grabbed the old 'brick.' Surfing the 'Net I found this page on Factory reset: https://support.google.com/nexus/answer/4596836?hl=en

Open the Nexus 7 group to see the relevant instructions.

You start with the usual Power-VolDown press, and try to factory-reset, then you need to do a few 'special presses' of the buttons to get to another screen more commands that get around the "no command." message. You can even invoke the ADB bridge, clear the cache, or format a partition (whatever that means.)

So I will use the old tab as a video recorder after uninstalling all but the essentials.