Portable Charging From A Battery

I am interested in building a portable charger for the Nexus 7-2 that uses a battery pack, like a 6-cell NiCd car pack. I have seen some YouTube videos that involve a 9V, a 5V regulator, and a couple resistors for the data lines? I figured that you only need the battery and regulator?

eBay has some imported solar chargers that are not very expensive, and might work if you are outdoors with good weather. I have also seen a reference to a hand-crank charger.

I think I would rather go with the battery pack, as I can quickly charge (in 20 minutes) that in the car, but I would presume the extra battery would be enough for a day of walking, with the GPS tracking. I think even a couple 9V batteries would suffice, but I'd still need the adapter.

Suggestions? I'd appreciated a link to a web page with a circuit diagram, and I have a Radio Shack handy, plus a Dollar-store.

There's lots of solar chargers out there, I even came across a wind powered one the other day. I agree the battery pack would be the most practical and reliable. Have you tried Googling for instructions, you're probably not the first person to try building one. If I come across anything helpful, I'll let you know.

Thanks, I did the "Google" thing before I asked the question. The problem is that there isn't much consistency between the many different methods I saw. Some were simple, with only a voltage regulator, and some needed inductors and step-up coils. The hardest part is getting a female USB port.

I plan on using a common 6-cell (7.2V) r/c car pack, so you don't need to step up the voltage or anything more than a regulator.

I even saw this video:

hich has resistors on the data lines, but that is for an iPhone, so I will conclude our Android device just needs simple regulated voltage.

Can we just dump a bunch of power through the USB port, or does the current need to be regulated to some maximum amount, as well as the voltage? I know the provided factory charge adapter has a maximum current, as do the USB charging units you can get for use in a car.
Last edited by a moderator: Jul 29, 2014

Since some of the DIY portable charging things utilized a 9V battery, it makes me wonder, just how much of a charge could you get from a little 9V battery?? Maybe it would be enough for your phone, to make one last emergency call, but my goal is to be able to have my GPS tracking application gong all day (8am-5pm) plus take some photos or videos, and view some documents with timetables. This is with the brightness full-on too.

the Nexus 7-2 has a battery with an almost 4,000 mAh capacity, so a little 9V shouldn't put much of a charge into it.

had the idea to get the female connector from a cheap USB charger found at the dollar store. After buying one and taking the circuit board out, I wondered if the thing would charge if you just hooked up a battery, such as a 9V transistor battery. I also happen to have a 12V pack that uses AA alkalines, so I first tried that.

It worked! I used the cell phone just in case, but it started charging, so I tried it on my tablet and that showed it was charging too

Then I tried a 9V transistor battery, and the tablet showed it was charging. I will keep trying lower voltage batteries (7.2V and 6V NiCd packs) until it stops charging. I will presume it should stop charging at a 5V input source.

I don't mind using the 12V pack of AA alkalines, but you just can't recharge those, so you need to pack as many sets of those as you think you may need, and recycle the depleted ones when you get home, or stop at a Radio Shack store. I think you could get by with 1 set a day, as long as you fully charge the tablet, and minimize the 'screen-on' time, as well as avoiding or minimizing the power-hungry application usage.

The cost was $1 or the USB charger, plus whatever battery, battery wires, and battery connector you decide to use. I have some 9V connectors in the parts bin, so I only spent $1 today.

Here are some photos. I even re-used the charger's plastic case. I took off the LED because it is just sucking up the electrons I want going into the tablet. The one photo shows the GND points, but not the +V, which is the slot on the end, where it connects to the fuse. It had a red wire going from the board to one of the metal 12V contacts, but it was misleading because it was the GND point on the end.

The Solder side of the circuit board showing 9V battery connection.

The Parts side of the circuit board. Notice there are two holes marked GND. I used the one on the end where the fuse goes.

The circuit board Installed back in its case, with the wires coming out where the fuse goes. 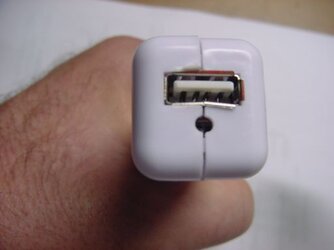 I have one of these....Man I haven't found nothing yet it wouldn't charge off a data cable...lol...

Also with the regulated ic in the car charger itself it looks for that voltage as it charges..When that's reached it will load test and if the charge holds it cuts off...6v will be plenty as long as the battery source holds that voltage during the duration of the charge..
Last edited: Apr 27, 2014

That takes all the fun out of barging your own power pack... lol
S

It works well though....lol...It's extremely hard to get one now also unless you buy bulk of them...I think I bought mine with a ton of cell phone cases and such about 6 years back..and still have that little jewel...The Cads are still charging like it was brand new to this date...But your idea should work...That IC on the lighter plug PCB is the regulator/monitor basically....You can find these as after market OEM's at NTEinc.com and match the numbers and you could build them for about $2 each....

The part numbers are not visible, so I will just have to go with a 7805 or similar voltage regulator. I even saw one circuit with a zener diode.
S

Yea 7805 will work also..and easy to find at Rat Shack...There was various types of builds I have seen and all do the same purpose...Good thinking on it...

Actually, I was thinking of the 78L05 voltage regulator, which is much smaller (TO-92), and more in-line with the charging needs of the device. Too bad I don't have the resources to use SMDs...

After looking around a little more, I found this guy that sells kits for small projects. He has a kit for a USB charger. In the schematic, he ties the data lines to +V through a resistor, as we learned from the iPhone guys.

My question to you techie guys is, do you really need the voltage on the data lines? I don't want to let the smoke out of my tablet...

I have some good news and Bad news...

I tried my adapted dollar-store car-lighter USB adapter, and the tablet showed that it was charging, but the percent number didn't go up. It went down even! And my 12V alkaline battery pack got a little warm while the tablet was "charging."

The Good news is that I bought a 2600mAh power pack designed to be used with phones or tablets, mp3 players, etc. and it is indeed charging the tablet. I did remember to use airplane mode for this tho; I think I used airplane mode for the first test, but I don't remember for sure.

I think that the problem with the first test was that the USB charger as not the "smart charger" type, and instead relied on brute power to charge the tablet's battery, albeit slowly. the commercial power pack was able to engage the tablet in fast-charging. I just have no way to check all the pins on the charging plug for voltage right now.

Some more good news is that by using airplane mode and minimizing the screen on-time (I even had the brightness full-on, BTW for today's sunny weather) I was able to track my GPS coordinates for the entire time I was out of the house, with a few pauses during lunch, or when I was sitting for a long time.

Another negative point I have is that since the charge plug sticks out the end of the tablet, I need to find a safe way to charge it without bumping the plug and damaging the charge port. It would be nice to have a right-angle charge plug that didn't stick out far, like an OTG cable does.

I bought this "Power Pack" 2600maH battery pack from eBay. It charges the tablet, but I'm concerned about the charging plug sticking straight out from the end- it looks pretty breakable sticking out like that, but with the tablet in the cover, I can carry it in the pocket of some cargo shorts and not break anything- probably. I'm looking for a right-angle charge plug, like what is used on an OTG adapter.

You just have to remember to charge the power pack *very slowly,* especially for the first few cycles. The charger for my tablet was too fast, and only partially charged the power pack, making me think it was defective. Charging via a computer USB port or a low-current AC adapter should do well. I used the latter charger, and probably the low-power USB port on the car's USB adapter.
You must log in or register to reply here.