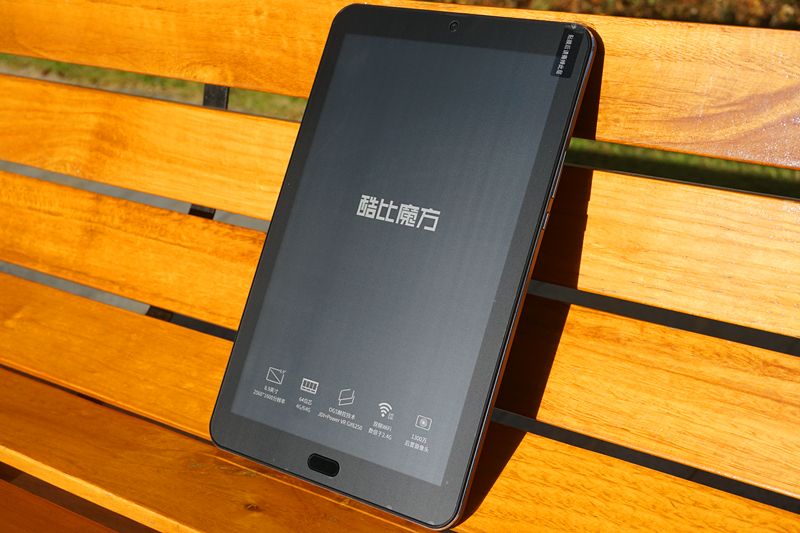 Alldocube, a.k.a Cube, is a Chinese brand best known for making affordable Android tablets. With the demand for Android tablets getting smaller each year, many of Chinese tablet makers either disappeared or changed their business focus, Alldocube hanged on. As a matter of fact, they released quite a number of models of different sizes this year. The Freer X9 is the latest addition to their lineup, and it is the first one this year to come with a high performance processor. 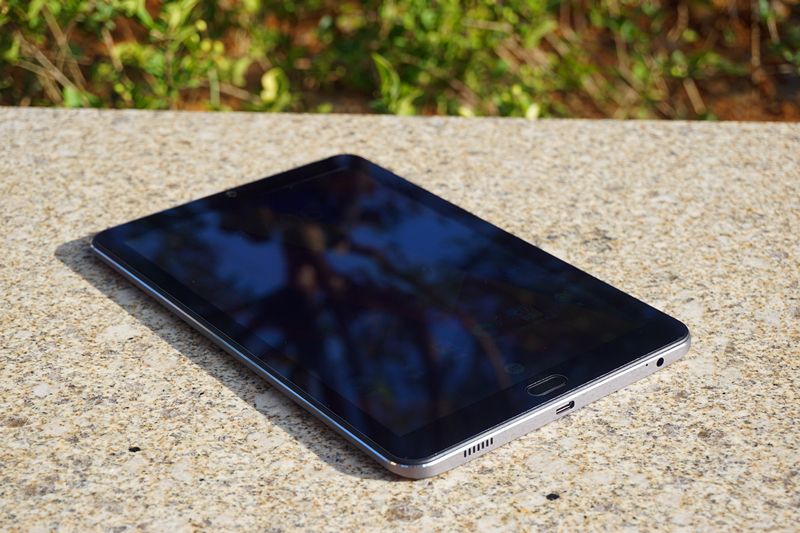 The design of the Alldocube Freer X9 is pretty generic with no core identifying features. The tablet looks like an enlarged phone, with portrait mode use as its default. The front is of course dominated by an 8.9-inch display, with a physical home button below and a front-facing camera up top. Alongside the display are the bezels and its clear that the Freer X9 isnt meant to win any design awards as the bezels are large and somewhat clunky, but for a relatively big tablet designed for using with both hands, we do need more bezels to rest our fingers on. One thing I need to mention is that there isnt a fingerprint reader built in the home button, which is a shame as every time you wake the screen up, you will need to input pin or draw patterns to unlock the device if you want a reasonable amount of privacy. 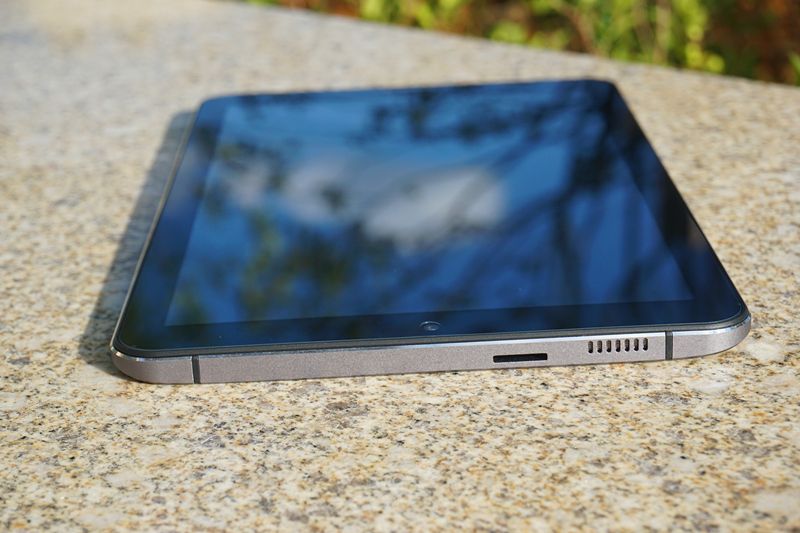 The top side of the tablet plays host to a Micro SD card slot, and one of the two speaker apertures. 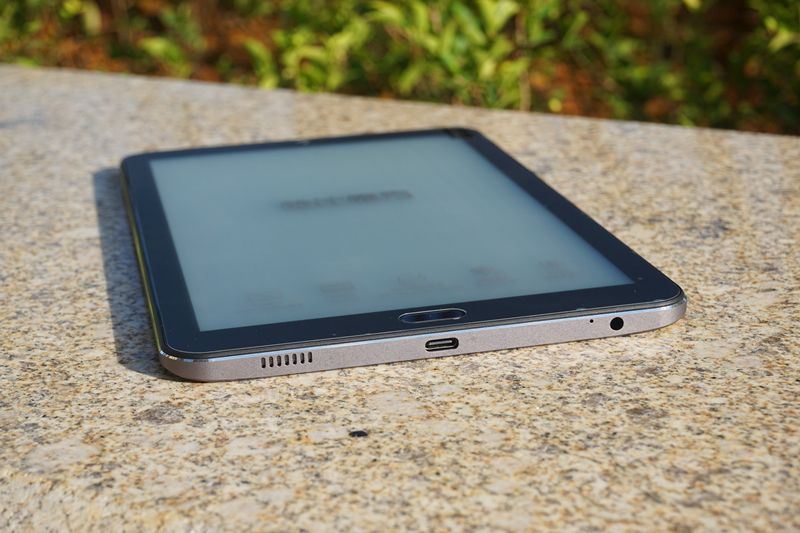 The bottom side hosts a USB Type-C port, a 3.5mm audio jack and the other speaker aperture. 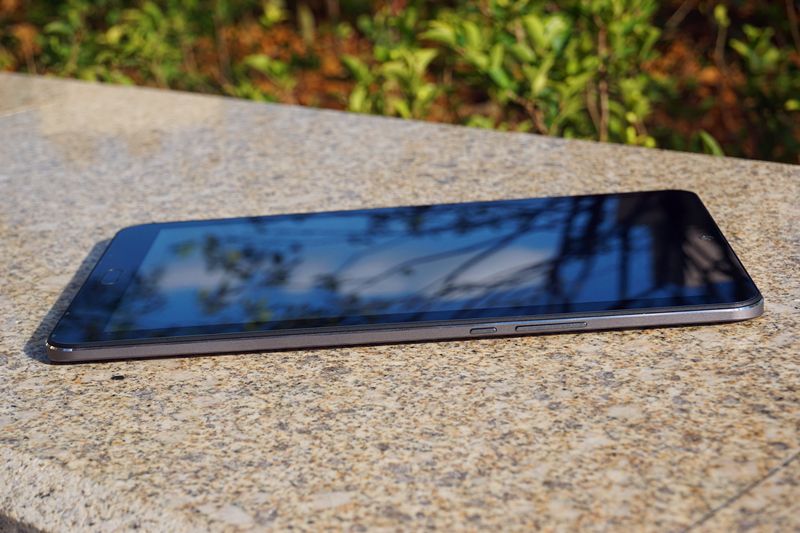 A power/standby key and a volume rocker are hosted on the right side of the slate. 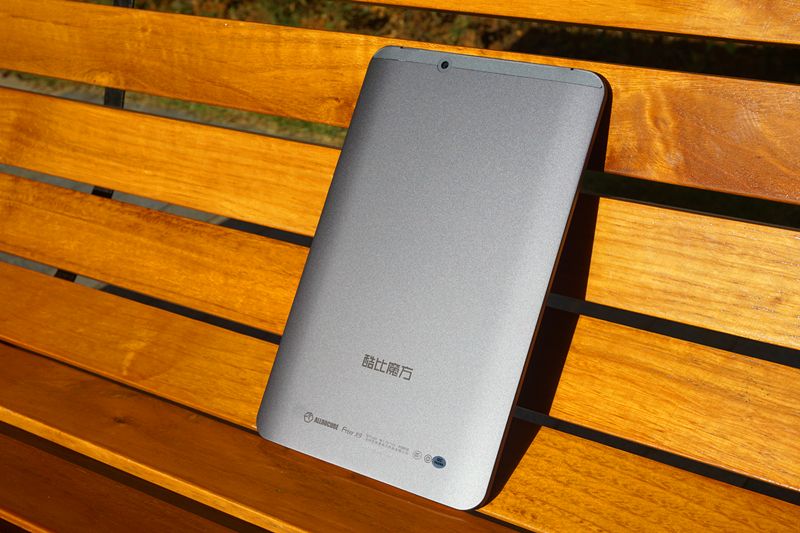 The X9 has an aluminum unibody at its rear and four edges. The gray coating is processed with anodic oxidation, not only does it make the tablet feel extremely premium, it is also quite resistant to scratches. 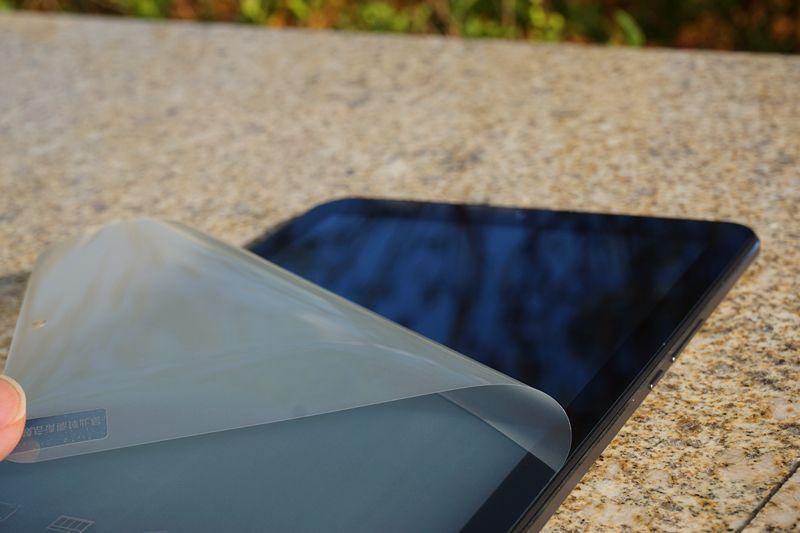 The Freer X9 measures 228*144*8.3mm and weighs 366g, pretty compact for a 9-incher. The tablet feels very robust, and proves extremely resistant to all of our squeezes and twists. 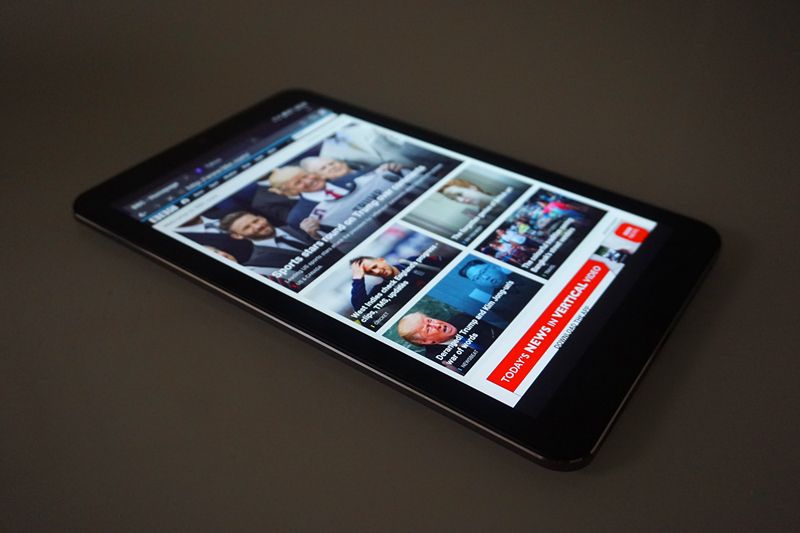 The Freer X9 sports an 8.9-inch IPS display at the resolution of 2560*1600px, which translates into a pixel density of 339PPI. This is one of the best displays weve seen on tablets from Chinese brands. HD videos and pictures look razor sharp, colorful and bright. Although it is still no match for the HDR-ready AMOLED display found on the Samsung Galaxy Tab S3 when it comes to contrast ratio and color saturation, it offers colors that are more natural, and it is definitely not going to be outshined by an Apple iPad if you put them side by side. 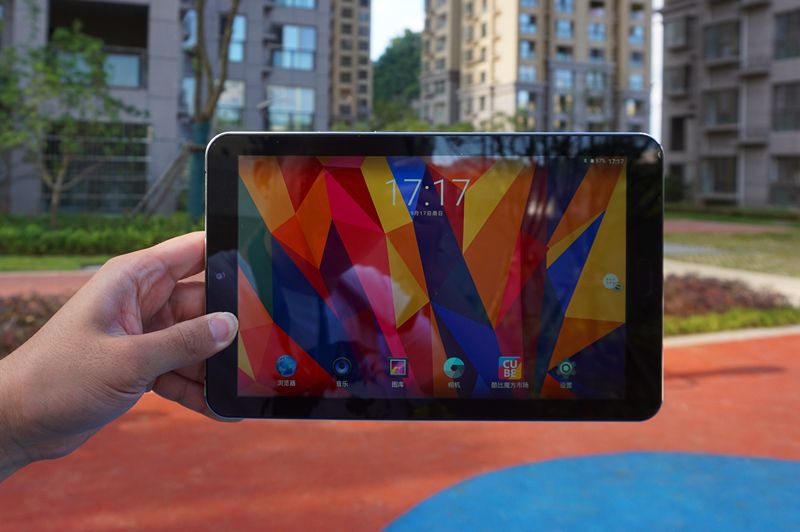 The X9s display is also extremely bright, contents are visible even under direct sunlight, which is pretty rare among tablets in this price range. Unfortunately, theres still bad news, as the display does seem to suffer from reflections, using it outdoors can be tricky sometimes.

The Freer X9 features two built-in speakers, with one on the top side and the other on the bottom. These speakers sound satisfyingly loud and clear, offer much better audio than the mono speaker found on most cheap phones and tablets, in fact they sound even better than the speakers on my Galaxy Tab Pro 8.4 and Microsoft Surface Pro 3. With that said, it's still best to avoid cranking it to max volume as the distorted highs will overpower the mids and lows. 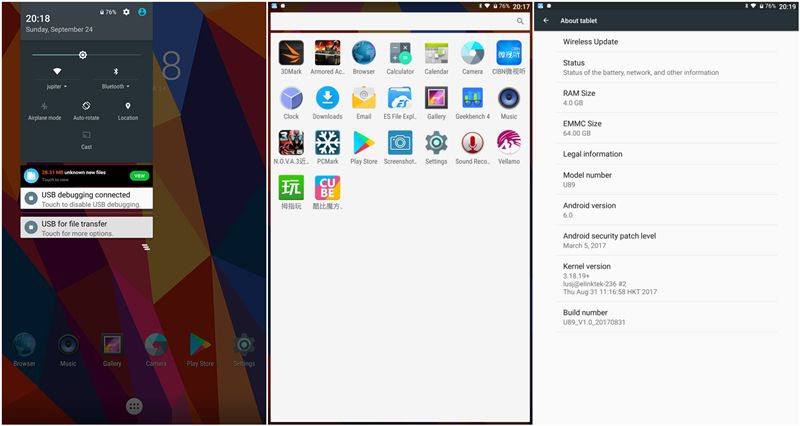 The Freer X9 ships with stock Android 6.0 Marshmallow out of the box. Pretty strange as the Alldocube FreeYoung X5, which was released earlier, runs Android 7.0 Nougat. You will get a clean Android experience from the X9 as there is basically no twist or customization made to the stock OS. 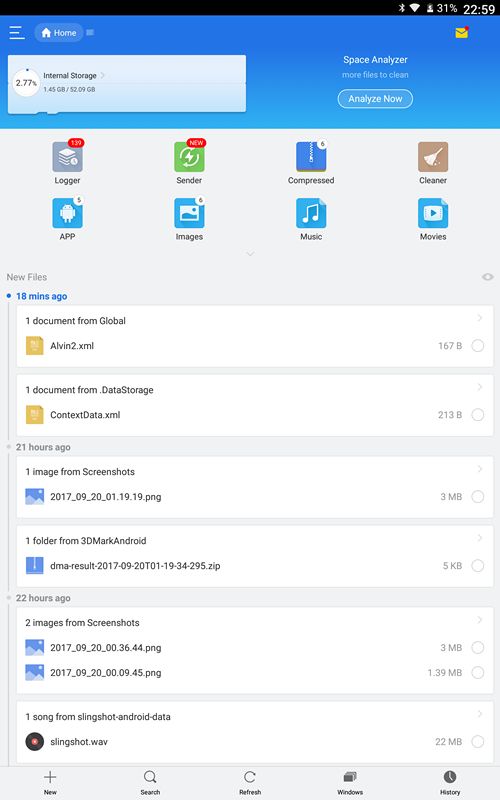 Preinstalled apps have also been kept to the minimum, the only third-party app is the ES File Explorer, users can get the apps they need from Google Play Store. 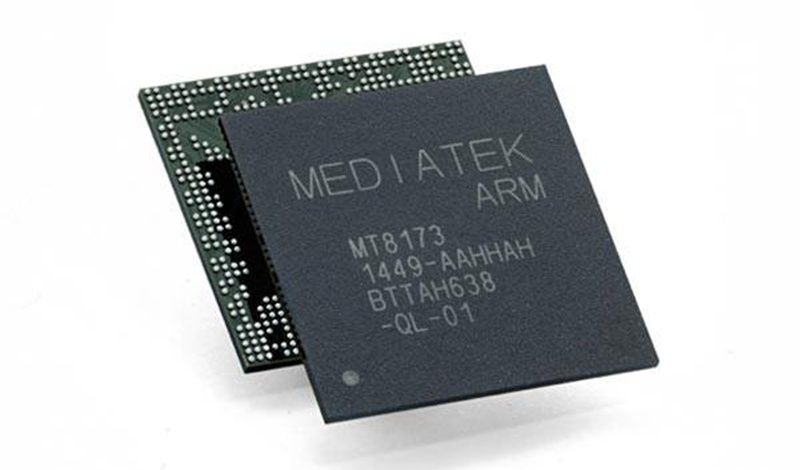 The Alldocube Freer X9 is powered by a MediaTek MT8173V Processor, which includes a quad-core CPU (2*Cortex-A72@1.8GHz and 2*Cortex-A53@1.4GHz) and an Imagination PowerVR GX6250 GPU. There are also 4GB RAM on board to take care of multi-tasking and 64GB of eMMc as internal storage. 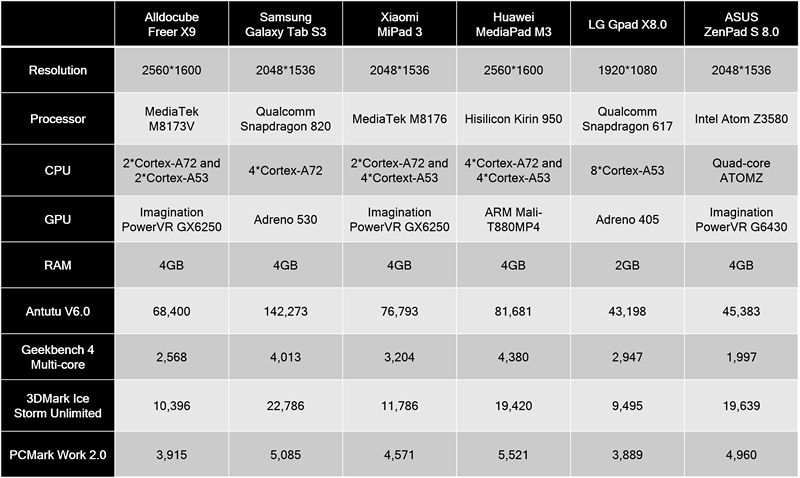 We ran a few benchmarks on the Freer X9 and got pretty decent scores. Though it wont rival high-end slates such as the Samsung Galaxy Tab S3 or Huawei MediaPad M2 in terms of overall horsepower, it still proves to be a capable mid-range tablet. 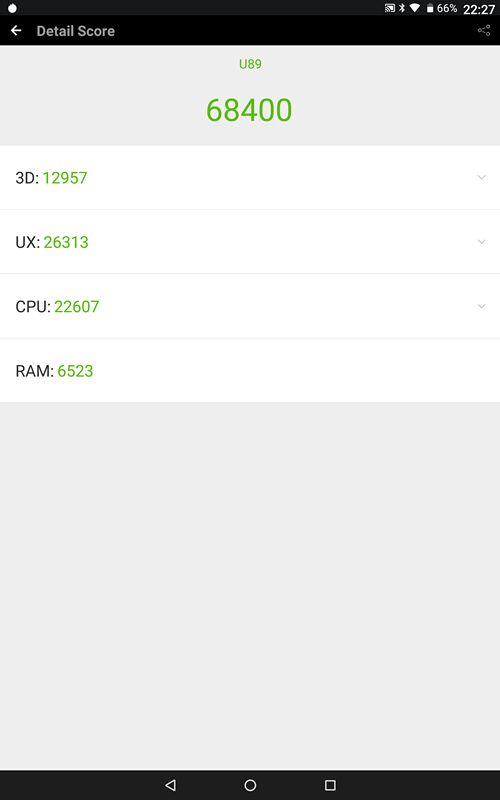 In the Antutu V6.0 benchmark test, the X9 scored 68,400, putting it ahead of most budget smartphones. 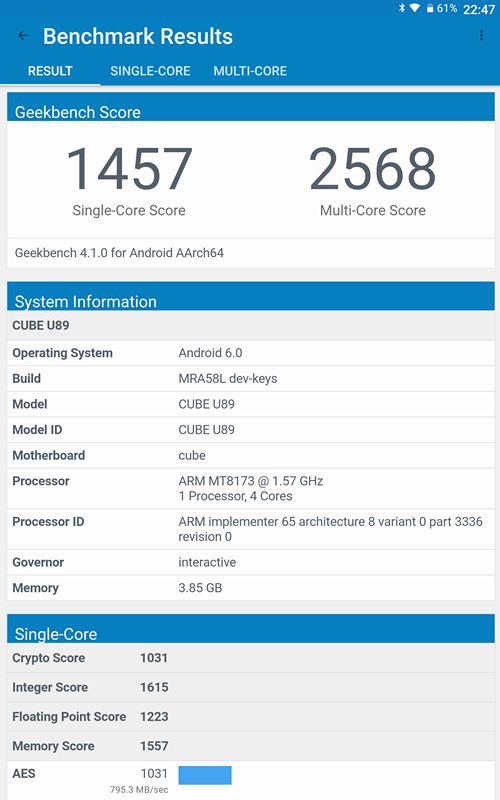 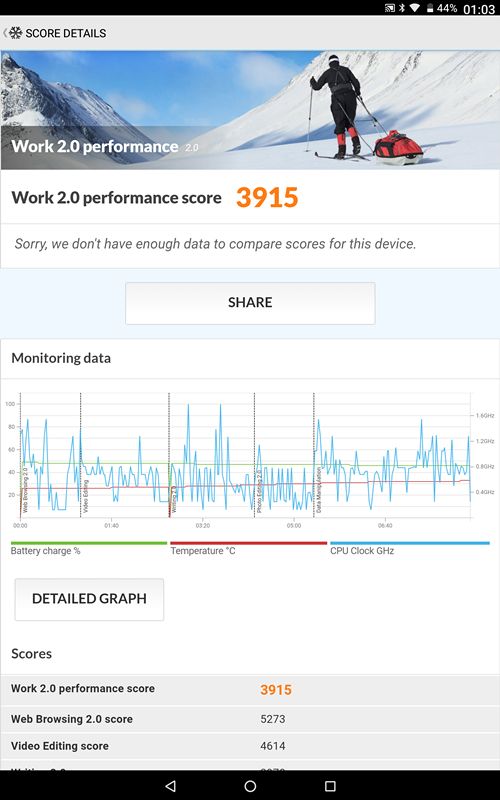 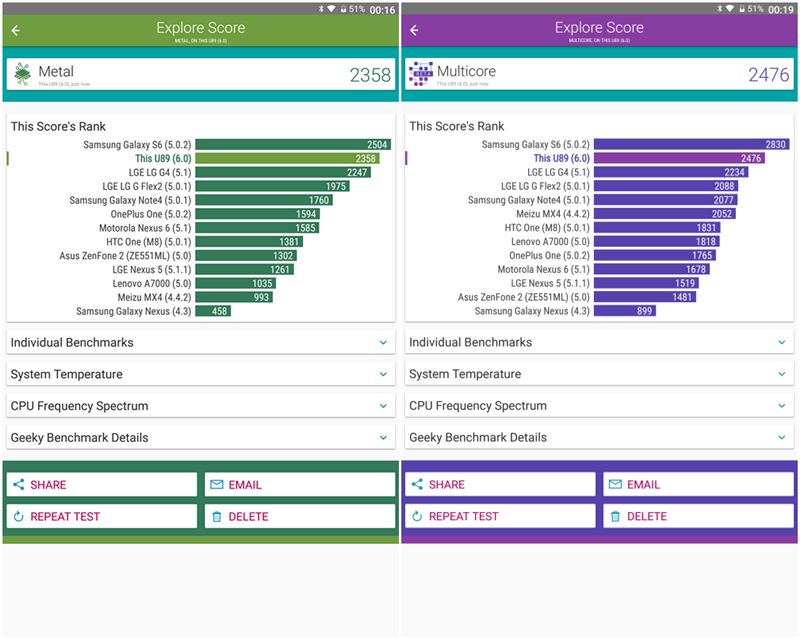 For some reason (could be the internet restrictions in China), the X9 could not finish the Vellamo browser test, in the metal and multi-core test, it got pretty decent scores. 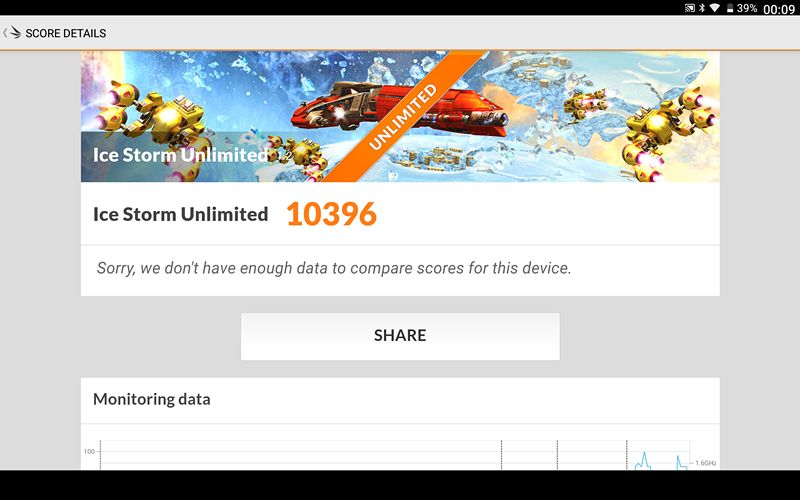 Unfortunately, the Freer X9 didnt impress us with its 3DMark Ice Storm score. 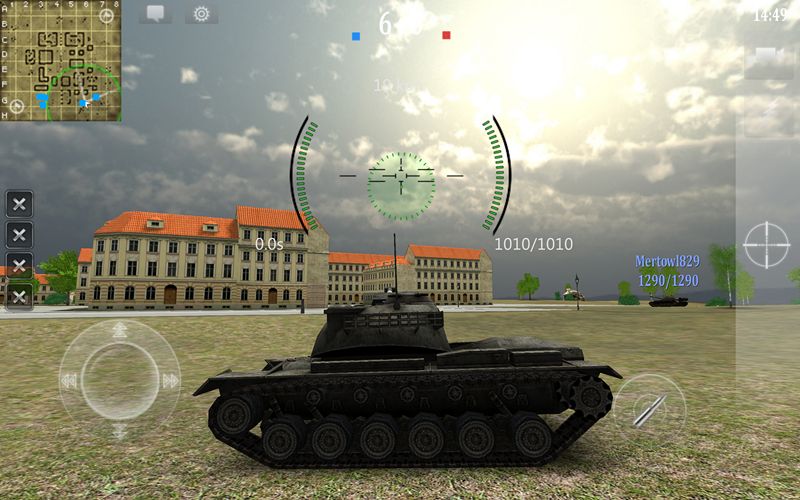 When it came to online chatting, surfing the web, checking emails, streaming HD videos and playing simple mobile games such as Pocket Mortys and Leo's Fortune, the tablet performed smoothly. Larger, more complex games such as N.O.V.A. 3: Near Orbit and Armored Aces were a bit slow to launch, but graphics looked spectacular and smooth during gameplay.

The Alldocube Freer X9 has a 3.8V/5500mAh Li-Po battery under the hood, which is a little larger than the 5,100mAh battery inside of the Huawei MediaPad M3. In our battery rundown test, we played a 1080P video on loop, with screen brightness set at 50%. Wi-Fi turned on to receive social media alerts and notifications. The X9 lasted 8 hours, 50 minutes.

In the real life use, I find myself charging the X9 every three to four days, as I do most of the social-networking on my smartphone. The X9 is mainly used for YouTube Feeds, reading and web-browsing. For heavy users, charging the tablet every two days should be enough.

The Freer X9 doesnt come with a wall charger, but the users can easily use their smartphone chargers to get a refill. The maximum charging current the X9 is able to take is 10W, which is not impressive as the fast-charging for smartphones can get really fast now. I usually need around 3.5 hours to charge the tablet from 0% to 100% with a 5V-2A charger.

On the back of the tablet is the 13-megapixel camera, which is equipped with an auto-focus feature. We've never put much importance on cameras in tablets, because tablets make for awkward and ridiculous-looking image-snapping devices. Plus, most people buying a premium tablet also likely have a better camera sensor in their smartphone. That said, you can get good photos from the camera here, so long as what you're snapping isn't also moving. The sensor's auto-focus is quite slow compared to those typically found in high-end smartphones. 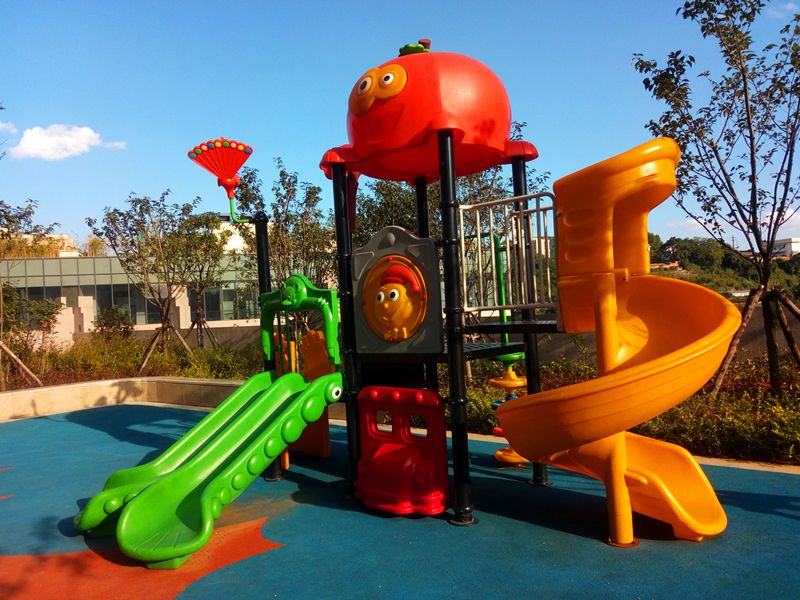 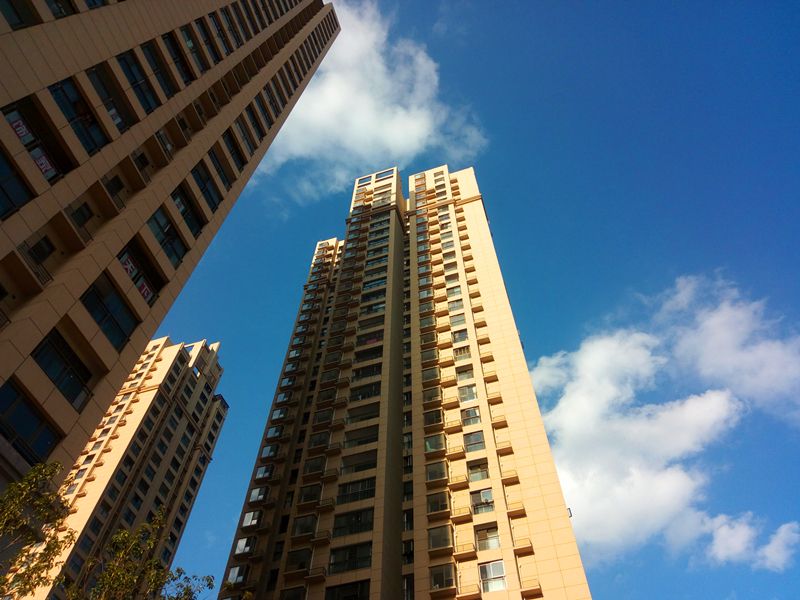 Test shots with the rear camera

There is also a 5MP camera on the front for online video chatting. It is not the worst front-facing camera weve seen on a mid-range tablet, but it is by no means a good one. Colors look a little bit washed out, and the photos also lose lots of details. For someone whos used to the auto-beautification-mode offered by mainstream smartphones, I can barely look at the selfies taken by this camera. 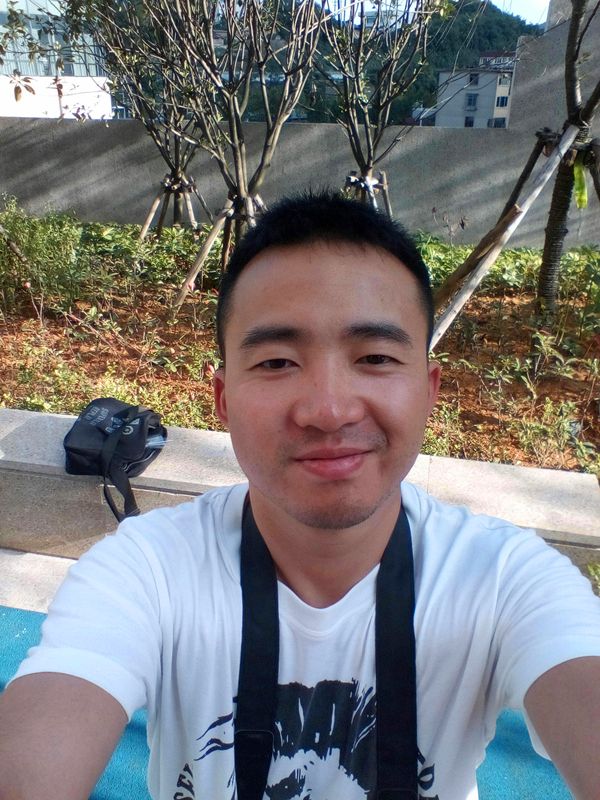 A test shot with the front camera

The Freer X9 is a Wi-Fi only tablet, and there probably wont be any cellular version coming. The slate supports 2.4GHz & 5GHz dual band Wi-Fi, connection is solid and stable, I can download files at top speed two walls away from the router.

The internal 64GB storage is expandable with a Micro SD card, I have inserted a 64GB Transcend card and it works fine.

The X9 also supports USB on the go. As the Type-C port of the slate is of USB 3.0 standard, transferring files from a flash drive is pretty fast. This port can also be transformed into an HDMI port with an adapter.

The price of the Freer X9 has not been announced by Alldocube yet, but rumor has it that it will be around $200, putting the slate in the price range of the Xiaomi Mi Pad 3 and ASUS ZenPad S8.0.

While the Xiaomi Mi Pad offers more horsepower and a much better battery life, and the ASUS ZenPad S8.0 offers a more user-friendly UI, the Alldocube Freer X9 holds its own with a bigger and more gorgeous display. All 3 slates offer a lot of value for the money, it all comes down to personal preference when choosing which one to go with.

Aside from the dated operating system and the absence of a fingerprint reader, theres not much to dislike about the Freer X9. Its metallic unibody design, build quality, display, speakers and performance all impressed us.

If you want a capable Android tablet which can handle more than just the basics, but refuse to spend three to four hundred dollars on a Huawei MediaPad M3, Google Pixel C or a Samsung Galaxy Tab S3, the Alldocube Freer X9 is really worth looking at.