For after 5 minutes or so on battery power the tablet shuts down with-out warning. Any attempt at restart just results in shorting the on time before shutdown. Then to the point that tablet "dies" even before getting to what I call "the unlock page."

Plus, I have also found that if the power cable wire is disbured, the tablet will turn off

I been searching on the net, but, found nothing

Even tried contacting the company, but, my mails keep coming back marked with quota exceed.

I haven't received replies form other sites I have asked

This is just a wild guess but I'd say there is a problem with a connection in the battery contacts or the charging circuit. The only suggestion I have is to take it apart and check all the connections.
Z

The only suggestion I have is to take it apart and check all the connections
Click to expand...

I beleve that the back just snaps into (and out of) place, but, is there a trick that I shold look out for?

Plus, one I do get inside, would I notice anything out of place?

Or out comes the volt reader?

I wish I had an answer. The best I can say is eyeball it to see if anything looks loose.
Z

I got the back off and to my eyes nothing look wrong.

I took a voltmeter to the battery and it read 3.7v

If the battery is ok then could something effected the tablet when it was used/stored/recharged in below freezing (20F) weather?

Possibly. Go through several deep discharge and charge cycles to see if anything changes. If it is the charging circuit itself it may be difficult to tell.
Z

Well, I'll try your suggestion and see what happens. If that don't work then this tablet may be heading back home to China for recycling

However, I do have one more question.

How do you read Android's built in battery chart?

I took the screenshot below 1 minute after turning on the tablet (and after it being off for 11 hours and being on AC recharge for 3 hours before that). 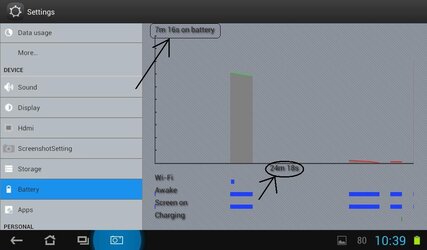 Yet it shows I been on battery power for over 7 minutes 16 seconds, and what is the 24 minutes 18 seconds notation on the X axis of the graft denote?

Have you tried a different charger cable?
You must log in or register to reply here.

Z
Running Tablet on AC only

P
Why won't my tablet turn on?