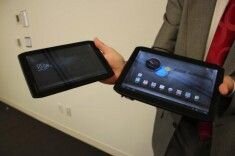 The Motorola DROID Xyboard will be available in a 10 inch model and an 8 inch model. The 10 inch model is described as a business focused Android tablet complete with a stylus. The 8 inch model is more of a media powerhouse tablet with 2.1 surround sound and an integrated subwoofer. Since each tablet differs in screen size, I imagine the 8 inch tablet will be slightly cheaper than the 10 inch model. However, pricing information for both Xyboard models are not yet known.

Both 4G LTE tablets share several common specs including a 1.2GHz dual-core processor, 5MP rear facing camera, 1.3MP front facing camera, 1GB of RAM, and Corning Gorilla glass. In fact, both tablets are thinner than a AAA battery! In terms of Android, each will run Android Honeycomb out of the box, but I imagine an upgrade to Android 4.0 is in both of their futures.

Verizon is planning to launch both DROID Xyboard models in the United States later this month. At this time, pricing information hasnt been announced, but it should be priced competitively under the $500 price point.
T

Unfortunately I heard these wil be dual core machines, hope I'm wrong about that.

Sent from my Transformer TF101 using Android Tablet Forum
You must log in or register to reply here.