First off, my first post..thanks to all for making this one of the best android forums on the net!!

So I bought a real cheap android tablet on Craigslist....yea yea I should have known better but figure for a few bucks wth....It had several process stopped issues which I manage to fix....Now running smooth but would love to update it to as highly as possible..


So from my research I know its a 1.6 android (the guy totally lied to me, said it was running 2.1 froyo and compatible w flash etc blah blah) but since I only spent a few bucks I dont feel too bad. and looks like it has wm8505 and 256mb memory and the processor is ARM926EJ-S Rev5 but what brand is it? or what clone does it more resemble
?
Its 7", red charging light, Green light when on, black headphone jack...attached is a pic of what it resembles..there is no kind of labels, back side is silver 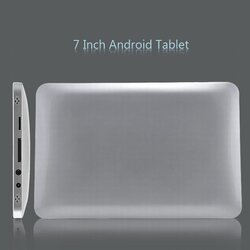 Thanks thats what I thought but had issues loading tipster's Honeycomb...
I'm good though, finally figured it out...thanks!!
You must log in or register to reply here.

Jan 13, 2011
ronko
R
E
Please help me identify this aPad so I can root and flash