Build quality is good, nice heavy feel to if. Device is black, the back feels like the iPhone 3G(S), may be available in white in the future (box has an indication for black and white). Runs quite smootly, although sometimes it stutters. Software seems flaky. Could not get on wifi out of the box. Had to turn off, reboot, turn on before it started working. It has happened a few times that it hung and stopped responding until it turned itself off. Although this was only in the beginning and does not seem to happen anymore. Compared to all the other chinese tablets (yes, this device is made by a japanese company, but would not suprise me at all if the company was run by chinese), this one looks and feels a lot better. And for this price there was nothing available that could beat it (most others had resistive touchscreens, no multitouch). Should be 3G ready, so attaching a USB 3G dongle will give you 3G access (untested).
Wifi borks now and then. Reset button doesn't fix it. Factory Default Reset does bring it back up.
For those who do not like the stupid WOOW! logo on the front, it can be peeled off without leaving marks.

When connecting this device to a pc (linux in this case) both the SD Card and the NAND Flash will be mounted. The NAND Flash contains a DCIM directory, but this device does NOT have a camera.

At the moment (dec. 2010) a free fake leather case with a built-in keyboard is offered free when you purchase the device. The keyboard connect to the device via USB (Host Mode). The case also contains a stylus, which is of no particular use. 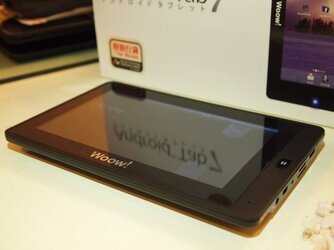 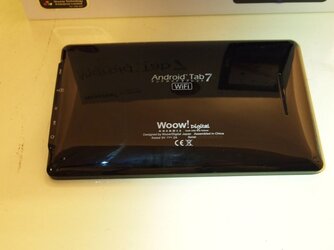 UPDATE1: use zRoot.apk to temp root device
UPDATE2: to enter recovery and flash with pc tools, press and hold VOLUME UP and BACK/ESC while connecting the device to a pc through USB. (this is different from other rk2818 tablets, those mostly work with holding only VOLUME UP or only BACK/ESC
UPDATE3: mtd5 backup partition is empty. so no update.img can be made and woow dicks are not responding to emails asking for the update.img. starting today i am sending them 1 email a day asking for the update image. feel free to help out and fill in the form on their website and ask for the update.img file. even if you don't have a woow tablet =). link to their website is at the top of the post.
Last edited: Aug 28, 2011
N

Following the instructions from another post i tried to extract the recovery image from the device but failed (for the moment).

Code:
trying to use dd to read the recovery image onto the sdcard results in a "/dev/mtd/mt3: read error: Bad address"
G

Is your set still working? Mine won't boot after just five days of light use. Just sent an email to Woow Digital and waiting for a reply. In the meantime, I'd suggest that others beware before ordering.

Image need to be repacked for permanent root.
N

Just got back from a vacation, and saw your post. My tablet is still working, but quirky. I've also contacted Woow and will send it back. The battery keeps draining even when it's off.
T

Hi all. Got Android Tab 7 3G. Not charging the battery. Who then was such a problem? Only works from the charger. Maybe someone knows what a battery is installed, how many volts?
G

They received my set on 15th Feb and they say it will take 10 working days to fix. Judging from these posts, it seems that this early batch has battery problems because mine wouldn't boot after leaving it overnight for a charge. So far Woow has been good with communication, sadly the product does seem to have flaky hardware.
N

Took my tablet back to the distributor in HK. Not very helpful. My sim card wasn't working because my tablet was the wifi only version (the shop where i bought it said it had built-in 3g...). So i wasted a lot of time there for nothing. Anyway, i took it back anyway, because the battery wasn't really good, didn't keep it's charge when turned off. And it stopped charging altogether the day before i took it in. They said it would take 10 days, it's been longer than that now, but i haven't called yet.
Woow says it's a japanese company, but it wouldn't suprise me if they only registered the company in japan so they can officially call themselves a japanese company, while everything else is being done in china.
I got another cheaper tablet in the meantime, also rockchip based and it stopped charging too. So this seems more like a rockchip problem. I haven't tested with the Woow tablet, but the unbranded rockchip tablet i have here does charge through USB, so for those who have a charging problem (not a battery problem), using USB may be a solution.

And there is no official upgrade to 2.2 for the Woow tablet yet (nor does it seem it there will be)
T

can't to upgarde my tablet!
N

brought my tablet in for the second time, micro SD card reader doesn't work anymore. might have been because they loaded the 3G firmware in my wifi only model last time when it went in for the battery repair. Bunch of lamers there who don't know their ****.

Advice people thinking of buying tablets.... steer clear of Woow! products. They may look and feel better than the rest of the cheap stuff, but they certainly don't work as well or at all. Rating on a scale of 1 to 10..... -5.

They are also not willing to send the tablet back to me at their expense although in their email they stated they would.

Bought a HTC Flyer a few days ago... Well worth paying over 3 times as much. Solid, actually, works, battery lasts a few days with sporadic use. Only thing missing is a Phone app.
D

Mine won't charge either. I guess WOW! got some bad batteries. They got bad customer service too.
You must log in or register to reply here.