The G3's camera uses a laser to measure the distance between the phone and its subject, making for lightning-quick autofocusing. Shooting is as simple as tapping on the point on the screen you want to focus on: the G3 will instantly focus and snap the pic.

The last three phablets in this comparison all have dual-LED flashes. And two flashes are usually better than one: they can help to create a more natural, less blown-out, look for your subjects when taking flash-based shots.

Phablets often have terrific battery life, since their huge bodies have room to cram big honkin' batteries inside. All of the devices in this group fit that bill.

The most interesting thing here is that the OnePlus One jumps from 16 GB to 64 GB of storage, skipping the 32 GB option that most OEMs place in between. Best of all, that extra 48 GB of storage only costs an extra US$50.

But if those internal storage totals aren't enough for you, then you can rest easy knowing that all but the OnePlus One have microSD card slots.

The One Max has a fingerprint sensor, but unlike those in the iPhone 5s and Galaxy S5, which live in the phones' home buttons, the Max's is on its back, below its camera. It's an awkward place to have to slide your finger (especially on such a huge device) and, when I reviewed it, I quickly turned it off and used a standard passcode instead.

The LG, Samsung and HTC phablets all have infrared (IR) blasters, which let you use your device as a universal remote control. It can be handy for changing channels on your TV, cable/satellite box or Blu-ray player.

All but one of our phablets run Android 4.4 KitKat, including the Play Store and other Google services, but they each have their own unique (manufacturer specific) skins pasted on top.

The most unique is the OnePlus One, as it runs Cyanogenmod 11s, a customizable, hacking-friendly flavor of Android that started as a favorite of the development community. For those who live and breathe for rooting and customizing, this is the first phone that's tailor-made for you (well, apart from Nexus phones).

The Lumia 1520 runs Windows Phone 8.1, a gorgeous and fluid mobile OS that still flies a bit under the mainstream radar. Part of that, though, is because its app selection just isn't on par with the Play Store's (Android) or App Store's (iPhone).

Though Google supports iOS with native versions of all of its apps (from a business perspective, it would be foolish not to), apparently the company has no interest in helping a smaller rival platform grow. Ergo, no official Google apps on the Lumia 1520. If you want Google services on Windows Phone, you'll have to make do with third-party and web apps.

Oh look, it's a Qualcomm Snapdragon party. The 800/801 family of chips that powers most of these devices is the current cream of the crop, delivering blazing-fast performance and good power management. The 600 variant found in the One Max is still very fast, but not quite in the same league.

It's either 2 GB or 3 GB of RAM in each of our phablets. The G3 actually has a foot on each side of that fence, and it will vary depending on which storage configuration you choose (16 GB storage gets 2 GB of RAM; 32 GB storage gets 3 GB RAM). 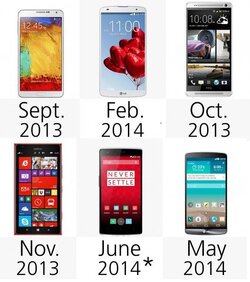 These are the original release dates for each phablet. There are, however, two big keys we want to hone in on here.
The first is that we're probably about two months away from the Galaxy Note 4. Samsung has been the leader in this product category, and if you aren't in a rush to snag a phablet right now, it might have something better on its menu come September.

We also want to put a big honkin' asterisk next to the OnePlus One. Though it's technically available for purchase, OnePlus is using an invitation system to drum up hype. So you can't just visit the company's website and order the phone. Nope, you'll have to either a) sign up for a newsletter and wait (who knows how long) for an invitation, b) pay above retail to buy one second-hand or c) schmooze someone who already bought one for one of their invites.

Companies can market their products however they please, but we were tempted to leave the OnePlus One out of this comparison due to these annoying availability constraints. On one hand, you could say that supplies are short and this is all the company can sell right now. But on the other hand, you could say that OnePlus knows damn well that scarcity tends to drum up desire, building an elusive, hard-to-get aura around the product. Chase this car if you please, but you might also want to consider the possibility that OnePlus' marketing department is playing you like a violin. 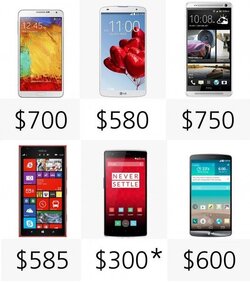 Prices vary by carrier and retailer, so we'd take these numbers with a few grains of salt. And, of course, if you live in the US, you may well be buying one of these with a new two-year contract, which will significantly drop the upfront price of admission.

We included an asterisk next to the OnePlus One here as well. On paper, the phone looks like an outstanding value  and if you can get your hands on one, it is. But, again, until it becomes widely available, it might not be worth the game of cat and mouse that it takes to get there.

So which one of these is the best? Our answer to that is the same as it always is: it's going to depend on what you're looking for.

The Galaxy Note 3 is easily the most popular phablet, and, until recently, the Note brand basically was the phablet market. You could also easily argue that its blend of tight hardware and stylus-friendly software still makes it the leader of this pack.

But there are some other terrific options here as well. If you get the opportunity to buy one, the OnePlus One just might deliver more bang for your buck than any mobile device ever made. With its customizable Cyanogenmod software, it's also an excellent choice for those who love to tinker.

Though it isn't cheap like the One, the LG G3 is one hell of a phone as well. It's the rare device that has a phablet-sized screen, but feels more like a standard smartphone. It probably provides the best balance we've seen of screen real estate and manageable size.