A lot of buzz on the blogosphere today about Amazon&#8217;s Kindle tablet - which will allegedly be called &#8216;Fire&#8217; - actually being a revamped RIM PlayBook. As interesting as it is that Amazon&#8217;s long-rumored, long-awaited tablet will essentially be a clone of the irrelevant PlayBook, the truth is that the buying masses won&#8217;t care. 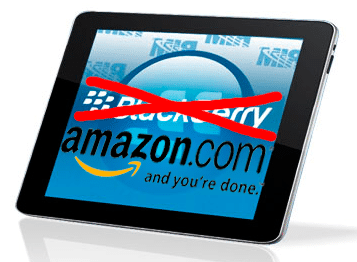 Why is the Kindle tablet a clone of the PlayBook? Because it is been designed and built by original device manufacturer (ODM) Quanta, the same company that built the PlayBook, rather than by Amazon&#8217;s Kindle design and dev team Lab 126.

The Kindle tablet/Fire won&#8217;t be an exact clone of the PlayBook. For one thing, it has to be cheaper as it&#8217;s expected to sell for $250. So it&#8217;s will feature a slower processor, two-finger multitouch screen and have no cameras. But the PlayBook didn&#8217;t fail because of the hardware, the PlayBook failed because it didn&#8217;t have the ecosystem to support it &#8230; and Amazon&#8217;s not going to make the same mistake.
First, Amazon is going with Android as the OS. Well, not exactly Android, but a custom version believed to be based on Android 2.1 (no, not the 2.3 version specifically aimed at tablets). And it&#8217;s with this custom OS that will be Amazon&#8217;s strong point. Amazon will turn its tablet (wherever it ends up being called) into a one-stop-shop for all things Amazon. The company doesn&#8217;t have to make a killing on the hardware because it can sit back and make money each time a customer uses the tablet to buy something from Amazon. Amazon&#8217;s power is that it has so much content - ebooks, music, video, an Android app store, a games and software downloads service, cloud services and audiobooks - that it can pipe to the tablet, it can&#8217;t help but make money from this endeavor. Problem is, other makers will have to slash their wrists in order to be able to compete.
The Kindle tablet ain&#8217;t no iPad killer - it&#8217;s not meant to be - but the $250 tablet could very well slaughter the Android tablet market. Watch out, after Amazon drops this bombshell I expect that there will be a lot of changes ahead. Expect price drops and for some makers to reduce, if not even pull out completely, from the Android tablet market.
Stay tuned for tomorrow&#8217;s Amazon press event, when we&#8217;ll likely learn a lot more about the tablet.
You must log in or register to reply here.

Why Losing Money on the Kindle Fire Will Work for Amazon

12 reasons you might NOT want to buy a Kindle Fire