The Lenovo IdeaTab S2109 is a mid-range tablet with a dual core ARM Cortex A9, 1 GB of RAM and the operating system Google Android 4.0 ICS but a detail that sets it apart from all others: the 9.7-inch display with a resolution of 1024 x 768 pixels and 4:3 aspect ratio. enough to justify the roughly $ 100 more than the Nexus 7?

After the first positive hands-on which we have already spoken, Liliputing colleagues have published a full review of Lenovo IdeaTab S2109 equipped with a display type IPS 9.7 inches with a resolution of 1024 x 768 pixels at 4:3 , a Texas Instruments OMAP 4430 SoC processor with dual core ARM Cortex A9 1 GHz and SGX540 PowerVR graphics subsystem, 1 GB of RAM and a storage capacity of 8, 16 or 32 GB, depending on the version chosen, all driven by operating system Google Android 4.0 Ice Cream Sandwich. 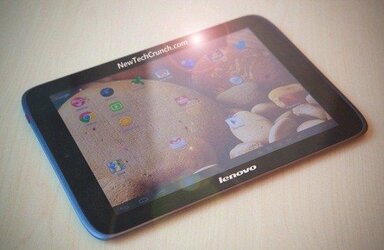 The shell gives rise to good overall impressions, the lines are nice and taken care of creation. The tablet is not very thin or very light but it is sturdy and reliable. Despite the large display, the front is not entirely dominated by the panel but has a very thin frame, which offers a minimum of grip during use. Valid the allocation of ports, including a headphone jack, video output miniHDMI, a microUSB port and a microSDHC memory reader. A more surprising of all are still the four rear speakers 0.7 W each of which is equipped with the tablet. Lenovo has done an excellent job here, the overall quality of the playback and volume are excellent, including the integration of software for SRS audio enhancements.

Also, when you rotate the IdeaTab S2109 from landscape to portrait position and vice versa, the device automatically recognizes the right and the left, so as not to reverse the audio channels, providing a reproduction always linear. Also applies the IPS display, offering, as always, a wide viewing angle in the horizontal plane, vivid colors and excellent contrast and luminance values. Its main feature as it is said to have a 4:3 ratio as the Apple iPad, but unlike most of which are 16:9 or 16:10.


This involves both a lower susceptibility to the use multimedia (movies will have the classic black bands above and below) but the other will allow for more convenient use of Internet content and e-books. then the choice depends entirely on the users needs. performance is average, because the equipment is identical to that of the Amazon Kindle Fire or Barnes & Noble Tablet Nook. Not the most powerful platform among those available for Android, but still provides good usability and a general sufficient fluidity. The duration of the 3-cell battery from 24.8 Wh of which is fitted to the Lenovo IdeaTab S2109 provides a range of about 6.5 hours, less than that of the Kindle or Nook which, however, also have smaller screens.


Overall, the judgment is positive. The device costs about $ 100 more than the Nexus 7, but the choice depends entirely on the users needs, given the excessive difference in characteristics. The first of its larger screen and a 4:3 ratio and a high quality audio, while the latter undoubtedly offers a more powerful platform and a new operating system even more (Android 4.2 Jelly Bean).

the speed is so quick,function is so cool.it is interesting for us.thank you for you sharing.
You must log in or register to reply here.