I've been trying to root this thing. I've tried Kingo, and king, and Magisk roots, but haven't succeeded. I've read about several people who have also tried to root it, but haven't heard of anyone succeeding.
Any suggestions (other than getting another phone, or using this one for a boat anchor)
are appreciated.
...... john

If it's a Verizon device, forget it. Root will not be possible as Verizon locks their bootloaders.
S

Hi Traveller,
It's a Rogers phone (which are notorious for being recalcitrant); but it seems unrootable from what I can see.
There are three things I want to do with it, that just don't seem to stick: forcing the screen brightness to 'stay' at ~50%, forcing the USB configuration of to stay on MTP or PTP .. something other than 'charging only, and one other I can't think of right now. Is there an app that will allow me to set these things so that I don't have to keep doing it?
Thanks,
....... john

Rogers may well lock their bootloaders, but if so that is a recent development.

You should be able to disable automatic brightness in the Display section of settings. That should allow you to set the brightness level to where you want it, though you will not be able to lock it to that level. For the USB protocol you need to enable developer options and look there. Recent versions of Android can set the default to what you want. Not sure about this device however.
S

Hi Traveller,
Yes, I've tried disabling it, but it doesn't want to play nice. Ah yes, locking it at ~50% is what I'm after. Yes, the USB configuration is in Developer options, which is where I have to go each time I want to add something to the SD card or download pictures, etc. Maybe the fact that I don't have a SIM card installed is part of the problem.
One other thing. SD Maid says that there are 350 mb of duplicates (which I find hard to believe); but the remove function does not work unless I buy it. I tried several of the (free) duplicate removers, but they all seem to be laden with ads and keep wanting to send me to websites. Is there a free apk that will work, of which you're aware?
Thanks,
...... john

350MB of duplicates isn't that hard to believe. I use SD Maid and actually paid for the Pro key, so I have no experience with any of the other options.

Back to the topic at hand, regarding root, you have to make sure the bootloader is unlocked or else you won't be able to root. So, have you unlocked the bootloader? I do not know how reputable the site I'm about to link to is, but its instructions should be sufficient to get the job done if you haven't already done so. Most important thing here is to make sure you download LG's Android drivers as the Google versions may not be sufficient. On this page you will learn how to unlock bootloader on your LG K4 (2017) with ADB Fast.

Hi Traveller,
Thanks for the help.
I've installed the qualcomm USB drivers and 'Minimal ADB and Fastbook';
however, I'm stalled* at "Waiting for any Device" after trying both "Fastboot Flashing unlock" and "Fastboot oem unlock" Any thoughts as to what my problem might be?
... john
* I waited for about 10 minutes each time

You need to install LG's Android drivers - if they have them - instead of the Qualcomm versions. They should be available for download at LG's website. You'll also need to ensure your copies of ADB and Fastboot are up to date: Minimal ADB and Fastboot doesn't have an update routine. Download the ADB and Fastboot package from Google's developer pages, open the zip, and copy all the files over the ones in the directory where you installed MAaF. Regarding that directory, it should be on the root of a drive, e.g. D:\ADB.

As to your waiting for any device problem, this could be the result of ADB and Fastboot not being up to date. It could also have to do with not having the correct drivers. Or else the information given at the site I linked to is wrong.
S

Hi,
It seems that I've created a problem, I didn't previously have.
From what I can gather, it will require my installing Visual C++, which
I cannot do, since Windows tells me that my OS is not genuine. 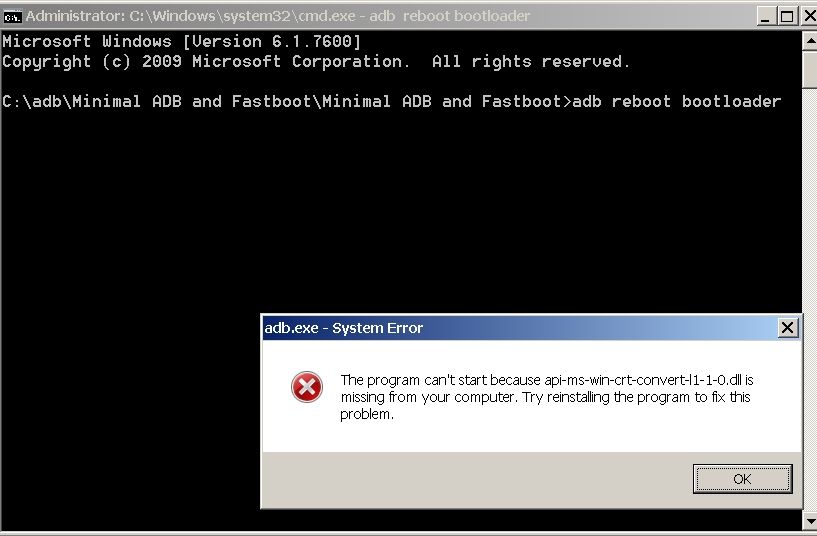 The less obvious answer would be to run Linux, either in a virtual machine or else from a live distribution, and then run the Linux versions of ADB and Fastboot through a terminal. From there, you could of course install Linux to the hard drive, which would definitely eliminate the Windows genuine error, at the cost of learning how to do things the Linux way.
S

Hi Traveller,
I've tried resolving the 'not genuine' issue several times, but it will require me buying a new license, which I'm NOT going to do; besides, I'm not sure that will solve my phone problem, even if I go that route.
I have several computers here and I'm somewhat familiar with Linux, having used, and removed it, in the past. The reason I don't normally use Linux is that I've used Windows for years and have found it, well, different; and haven't wanted to take the time to become familiar with it; but, maybe it's time to bite the bullet. Which version of Linux is easiest to transition to for Windows users.
Thanks for your help.
...... john
P.S. I hate Windows 8 and Windows 10; that's why I'm still using Windows 7

Hating Windows 8 is understandable. No start menu was a deal breaker, which is why it was brought back for Windows 8.1. I personally had no issue with Windows 10, and Windows 11 is fine if you use a start menu replacement like Start 11 or Open Shell. However, purchasing a license in your case would not be possible as Microsoft only offers Windows 10 or 11 licenses as far as I know.

As for a good flavor of Linux to work with, one of the variants of Linux Mate is probably your best bet. I use the XFCE variant on a 2011-era netbook and it works well, especially after I replaced the mechanical hard drive with a SSD.
S

Hi Traveller,
Perhaps 'hate' is too strong a word for Windows 10. It has several nice features, actually way too much for someone who feels Windows 7 to be just about ideal. But what really irked me about Windows 10 was it's insistence on doing what it wanted ..... when it wanted. I found it to be very resistant to modification.
I will look into Linux Mate.
I found a couple of programs that have allowed me to clean up my LGK4, specifically All-In-One Toolbox and Droid Optimizer; so rooting it is on the back burner for the moment.
Thanks again for all your help. I appreciate it.
..... john
You must log in or register to reply here.