Is a new version of the software developed by SecretsLine Ltd Company specifically for the Android operating system. The program is designed to protect Android-devices users on the Internet from reading information on his/her data and surfing. When the user visits the sites containing counters monitoring user activity, Safe Connect blocks access to any information about his/her actions and allows him/her to remain anonymous. Data are protected by means of traffic encryption. This software also allows to hide the real IP-address. All data on navigation become inaccessible for tracing and further use by companies in commercial or other purposes. This application reduces traffic and blocks phishing-sites as well as gives an opportunity to disable advertisements. Information on the user is completely encrypted. SafeConnect software can be used on many the device supporting Android operating system: smart phones, tablet computers, netbooks, etc. SafeConnect is used with WiFi-connections and the mobile Internet. 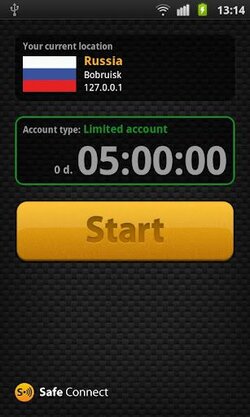 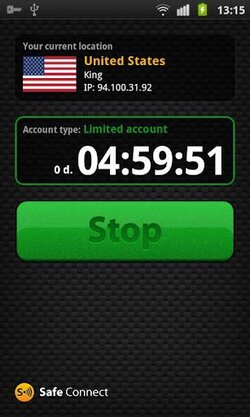 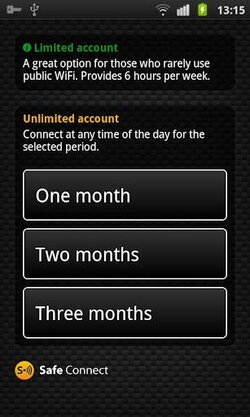 The software work principle involves several actions. To begin with, the user connects to SafeConnect. After that, the operating system service connects the user with one of PPtP-servers. The whole amount of traffic moves through the created connection whereas the real IP-address of the user isn't determined by any site. All advertizing and banner networks are deleted at the server level which allows to reduce traffic and load pages faster.
The program is available in two modes. The free version of SafeConnect application is limited and gives an opportunity to be under protection only 5 hours per week. Hours are chosen automatically. For a longer period of time there is a paid unlimited version of the software protecting the user up to several months, depending on the amount of payment.

Users of SafeConnect are provided with OpenVPN support increasing connection reliability and decreasing the level of dependency on different settings of the network used.As SafeConnect has just been released, at the moment it is going through its testing period which will last for two months. During this time, the number of hours in the limited mode won&#8217;t be written off, as SecretsLine Ltd is still working at the software refinement. Within the probation period, the developing company takes into consideration all wishes and offers of its clients. 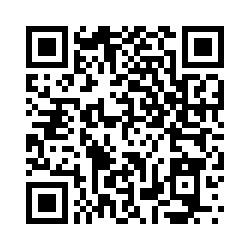 Added new function "1 friend - 1 month" function, invite a friend and get a month of access free for yourself and your friend. 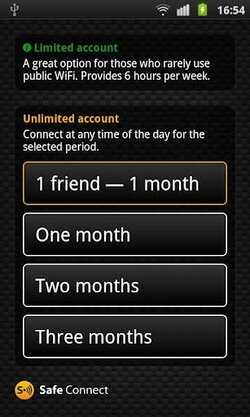 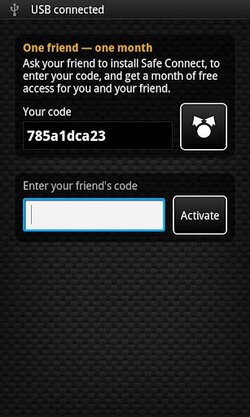 Despite Android's Data Encryption, Mobile Security Is In Users' Hands