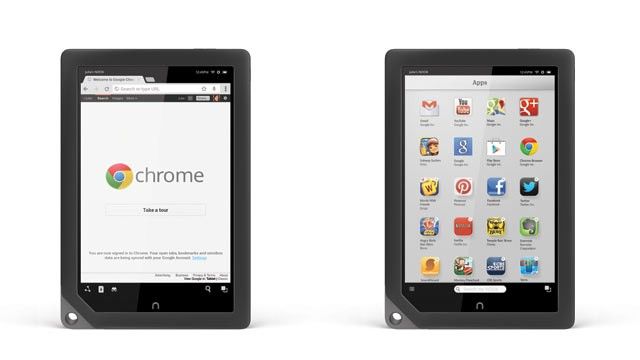 Similar to Amazon's Kindle Fire, Barnes & Noble's Nook HD and HD+ tablets have always stood in their own silo. While they run Google's Android operating system, they haven't had Google's own Play Store and other Google apps, like YouTube and Gmail.

That's now about to change. Today Barnes & Noble announced that its Nook HD and Nook HD+ tablets will be getting Google's own app store and its full suite of apps. A wireless update for the tablet will give owners access to the 700,000 apps in the Google Play store plus the thousands of movies, magazines and books in the store. Other Google apps like Gmail, YouTube and the Chrome browser will also come along with it. New Nook tablets will come with the store and those Google apps preloaded.

So why is the book company adding Google's store? The company says that it recognized that people wanted more apps and content. "We have always had an app experience and a curated app experience -- curation is something we have been really good at. But we recognize there are a large number of customers who buy multi function tablets who want access to the whole library of apps," Barnes & Noble VP Jim Hilt told ABC News.

Typically Google requires official Android devices with the full app store to preload Google's own suite of apps, including Gmail, YouTube, Google Play Music and Chrome. As such, Barnes & Noble had to remove some of its own apps to gain access, including its own music app. Hilt wouldn't comment on the terms of partnership when asked. Barnes & Noble's Nook Store, which has millions of books and magazines, will still come preloaded on the tablets.

However, while competitively priced and nice pieces of hardware, Barnes & Noble has said that sales of its tablets have been disappointing. In February, after announce its holiday period earnings, the company said it fell short of hitting sales targets of the two Nook devices.

"Despite generating very strong reviews and the highest preorder volume we received on any Nook launch to date, sales of those products didn't materialize at the rate we expected through holiday, as heavy competition in the tablet market negatively impacted our sell-through," William Lynch, Barnes & Noble CEO, said during the earnings call.

The Google Play store will be available starting today on the Nook tablets.

I was pleased that Barnes & Noble (B&N) had updated its HD line with Google Store. I knew this software upgrade would make the low-priced HD  usually $149 to $199 until May 12  a truly usable Android 4.x tablet. What I hadn't realized was that it would transform it into a good, albeit low-end tablet.

One major software update later, and the Barnes & Noble Nook HD has become a compelling low-end Android tablet. (Image: Screenshot by Steven J Vaughan-Nichols) The B&N Nook HD started life in late 2012 as B&N's answer to Amazon's Kindle Fire. It was, and is, a 7-inch tablet.

It comes in two colors: Smoke and snow. The Nook HD has a soft, rubberized back, with a volume control rocker switch on the top-right edge and a power/sleep button on the other side. On the HD Nook's top, you'll find a standard headphone jack and microphone. On the bottom, you'll find a custom 30-pin charging/USB 2.0 connector. The device also comes with dual speakers on the lower back.

At 0.68 pounds, it's as light as an iPad mini, and lighter than a Nexus 7 or Kindle Fire HD. For all of its lightness, I found it to be the most comfortable tablet-like device for long periods of reading I've found to date, which is why I bought one late last year.

Under the case, you'll find a dual-core, 1.3Ghz, ARM Cortex-A9 processor. This is backed by a PowerVR SGX544 chip for graphics and video. For storage, the low-end model comes with 8GB. Of that, 5GB is available. That's not much, but unlike the Nexus 7, iPad mini, or Kindle Fire, the HD, and its 10.1-inch tablet big brother the HD+, it comes with a microSD/microSDHC slot that can hold up to 32GB of storage on an inexpensive card.

For networking, the HD supports up to 802.11n and Bluetooth. It does not have a camera, 3G/4G, or GPS. But, if you can live without those three items  and I can a lot of the time  the newly renovated HD has a lot to offer.

While the B&N Nook interface looks the same as ever, I've found that simply adding Google Play had made it much more useful. As you add new apps, they're added to the Nook carousel at the top of the main Home screen. You can also add apps from Google Play to your choice of home screens.

It's those apps that move the Nook HD from being an ordinary e-reader with some tablet-like features to being a real tablet. However, you can't download apps that the hardware doesn't support  there's no point in Instagram without a camera after all. Other than that, you can download any program you want from Google Play. From popular games, such as Candy Crush Saga, to the handy Swype keyboard and Amazon Kindle ebook e-reader app, they're all available and work well on the Nook.

What's that you say in a tone of disbelief? The Amazon Kindle ereader is also available on the arch-enemy B&N's Nook now? Yes, yes it is, and it works fine. For that matter, you can also buy, download, and play/view Google' ebooks, movies and music on the Nook.

You can, of course, still read B&N ebooks, and view and listen to other B&N content on the Nook. Unlike the Kindle, which is locked into the Amazon eco-system, the Nook HD really is a full-powered Android now.

Are there better tablets? Sure, but for the price, the refurbished Nook HD deserves a second look if you want an affordable low-end tablet. I'm certainly glad that I picked up mine.

Well duh! We have known all along that with a little help the Nooks make great tablets
You must log in or register to reply here.

Amazon and Barnes & Noble may put the brakes to Android hacking