Video - What I have learned thus Far

Hullo to all,
The methodology was inspection of the sample video provided, Google and churn.
I have one of the 256 Mb Varieties of the APad with the supposedly faster chipsets. I will not go there. Bought on E-B like most of us for about $120US.
I use a 4Gb MicroSD and an 8Gb MicroSD as my storage. I ignore the built-in storage.

Now on to the Video. I was tearing my hair out on converters and the best codec. I spent trials with tools I had and suggested. None seemed to work. I tried AVI, FLV, mkv, ogv. and on and various sizes and speed and frames. I could go on
Quite simply it boiled down to using the MP4 format and keeping the rate to about 600-800. The tool I am using is VCK.exe from Android123.com. Quite simply it works http://down.android123.com/software/vck.exe
I cannot read Chinese for anything so had to go by guess and thrashing.

The green Plus Adds video. The blue rectangle starts it. For mine, I found do not make it more than 320x240 for best results but I get the following screen clarity. Note: The picture is actually better than this. I use Meridian as my video player 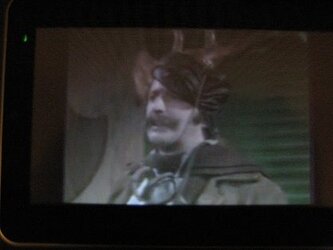 This converter works. The plus side, I can watch anything I rip to my tablet. Downside, Jerky and pausing at times. Best things to watch Anime and silent movies. Worst: High Action and movement. A 300 Mb MKV becomes a 180 Mb MP4.

Gurgle,
Tech stooge in the realm of the Internet

I can read Chinese. But still I prefer to use:

Thanks for the suggestions. I need to move into the present. I have so much which I had ripped to either basic AVI or XVid. H.264 or HTML5 is the future but want the dust to settle before really looking at HTML5. The truth of the matter is I will rip my DVD and then keep using that same codec even when fuzzy or totally obsolete.
I recognize what Android can and cannot do in regards to rendering. I just want something watchable without breaking it into 10-20 min segments. My attempts with Mediacorder would tend to freeze about 30-40 minutes into the view session.

Gurgle
Tech stooge of the Internet

Well it really depends on your hardware. My Apad does a bunch of different formats up to 720p. TCC8902 is even better with videos.
You must log in or register to reply here.

N
Groupon Flytouch i7 - What I have so far and a call for help...