After update - desktop starts at "Powering Off" spinner - and then shuts off - help!

I've been updating with reckless abandon and seem to be in a unwinnable state game. When the unit powers on it loads, hits the desktop which is fuzzed as if the power button has been held in and Power Off selected. It then shuts off.

Clearly the storage isn't being completely wiped by the update. Is there anything I can add to the update scripts that will completely wash the device of any residue. It seems like this power off command is sitting in some persistent storage somewhere and I can't figure out how to get rid of it. Re-updating seems to not work.

Have tried pressing buttons at boot, cracking the case looking for some sort of reset - all the obvious threats with no luck. I do have a keyboard on the thing - and no luck with that either.

Many thanks for your attention! 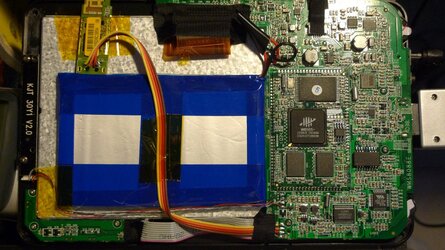 Just in case anyone is interested - here's a pic of the unit cracked open. Seems to use two chinaphone batteries wired in serial.
You must log in or register to reply here.