And on the 2 millionth day, NotionInk created the Adam 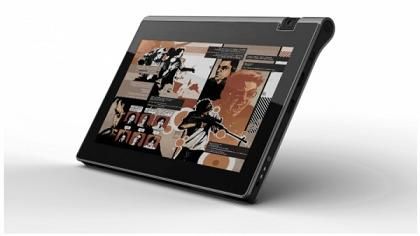 (This is a guest post by Michael Heller from ThisGreenMachine.com. The original article can be found at this link.)

The NotionInk Adam has been in and out of the news for most of 2010, and Ive been holding out a modicum of hope that this device would not only prove to be real, but perhaps even live up to some of the hype that has built up around it. It was the talk of CES in January[1], and seemed to be a marvel of engineering, including a Tegra 2 processor, a 185 degree swiveling 3.2MP camera, full 1080p support, and of course, the coveted transflective Pixel Qi screen, which can switch between LCD and eInk display for extra battery and use in direct sunlight. But then, undetailed delays hit and the Adam and fell out of the public eye. Many believed it to be vaporware, but recently, Rohan Shravan, the Creative Director, Founder and CEO of NotionInk, has been giving some details and images of the Adam on his blog[2]. I was able to ask Rohan a few questions about the Adam, the development process, and why he thinks his product will be a standout in the upcoming field of Android tablets.

The Adam has had a tumultuous development cycle that was sorted out well at Slashgear[3]. The basic story is that the Adam was a hot commodity with tons of buzz, but then venture capitalists (VCs) came in and attempted to change fundamental aspects of the device, including changing OS to Windows 7, and changing the Adam into a netbook, because they didnt understand that the netbook had already been made obsolete by the introduction of the iPad. Rohan and NotionInk stayed postive throughout, saying about the ordeal:

We have seen times when everything was out of control, and times when even without doing anything, everything was done for us. I think its something which every start-up goes through, but the most important part is we are loving what we are doing!  My job allows me to be creative!
Click to expand...

The Adam is now back on track, and is currently waiting on FCC approval [4] before beginning mass production. The NotionInk team has put a lot of work into the design of the device, not only physically, but with the UI and software design as well. As many have pointed out recently, Android 2.2 is not designed for use on a tablet, and Rohan even told me that he considers all Android tablets [to be] experiments until Google releases the Gingerbead. One attempt to deal with this issue is the Eden [5], a paneled UI design allowing users to run apps designed for cell phones in a small panel on one side of the screen, while concurrently running another focused app. Rohan even hinted that NotionInk would be open to licensing both the Adam UI and the proprietary app store, Genesis.

According to Rohan, the Genesis app store has hundreds of developers already working on tablet-specific apps. The Adam needs the Genesis store because the Adam is a very unique UI and application concept. All android applications will still work, but you need dedicated applications to make complete use of Adam. As I have been known to do, I questioned Rohan on the connection between advocating an open system, while building a proprietary app store. Rohan told me,

We are ready to give people access to Market store or any other app. Its just that not all tablets have access from Google. Also, Genesis is a pure Tablet App Store, and you will not find mobile applications. All apps on Genesis will be designed for the Adam UI, and hence it is required!
Click to expand...

Given that NotionInk is open to licensing the Genesis store, this could become a viable option for devices like the Augen tablet, which do not meet Googles standards, and therefore cannot access the Android Market. Of course, this could also be a space for bigger name markets like Amazon or Verizon to move into, and those would likely gain traction much faster than a start-up like NotionInk.

No one was sure that the iPad could be a compelling device until people used it. And now, there is talk that maybe a 10 inch screen (like the Adam) isnt the best size for a tablet [6]. Though NotionInk has no plans for a smaller tablet, they have hinted at a mysterious product called Eve, which has been rumored to be a cell phone, or possibly another tablet. Unfortunately, when I pressed Rohan on this subject, he simply said, She is a companion for Adam 

So, despite some bumps in the road, the Adam still looks like an impressive piece of technology. The physical design is unique, and the Adam UI seems to be a good compromise to the limitations of Android 2.2 in this form factor. However, as with the best devices out there, the proof is in using them. All the tech specs in the world cant compete with actually holding a device in your hands and using it. At least it does seem as though this tablet isnt vaporware, and we will get to hold it in our hands soon enough. I hope it can live up to the promise.