how do we make use of the above image???


ps thanks leighw101 hope this will be a huge help.
L

lohtse said:
how do we make use of the above image???


ps thanks leighw101 hope this will be a huge help.
Click to expand...

I'm working on getting access to the files on my laptop running win7 atm. If that fails then it's a quick ubuntu install tomorrow on a virtual machine to see if I can take a peek inside and get a directory listing
L

Just a quick question though for those in the know - what file system is the resv image using as I can't seem to get anything to read anything from the image at all.
It's either coming up as blank or it needs formatting/has an invalid superblock....

leighw101 said:
Just a quick question though for those in the know - what file system is the resv image using as I can't seem to get anything to read anything from the image at all.
It's either coming up as blank or it needs formatting/has an invalid superblock....
Click to expand...

If it's all FFFF's it's just padding and is blank, meaning it doesn't contain any data. Some devices have had images/firmware stored in this partition others have not. No reasoning why but maybe the way the images where burned by the company.

Good news, the resv.img posted has data but will take a little investigation to identify if it is a usable image.

One image in this data is NK.img which needs to be identified. It falls between U0 and Kernel. A Google search finds my own posts regarding this naming, useless. More researching as the image is broken and or only a fragment based on the compressed header. 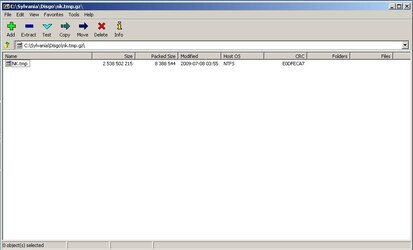 Update: Got a valid image by pasting the last chuck 8,192 bytes to the beginning of the data in the dumped partition. Then unpacking the archive to obtain a 60MB file starting with kernel.dll.

Final update but open for discussion. The image stored is NK.exe which thanks to a search on xda-developers is "NK.EXE is a required kernel system process" for Windows Mobile (CE).

So the discussion would be - Is there Windows CE running on some Disgo hardware or was this just another sloppy mistake?

Any insight to what this image? It can't be used to restore the system image so we need another Disgo user to see what they may have stored in the mtd2 "resv" partition.
Last edited: Sep 23, 2011

would love to know how this is going myself, really want to get updated to at least 2.2
L

FWIW I emailed Disgo with the following yesterday:

It has been MONTHS since any word on this, the last statement being about 'technical issues with deploying the update'. Can we expect an update to 2.2 for the 6000 or should we just forget about it? I think we at least deserve an honest answer as to whether this is going to actually happen.

I am temporarily using installs of 2.2 for similar sylvania products without issue, but they are only BETA and are missing the flash support. How about releasing the Disgo update in its current state as a BETA to an .ius file or similar for those of us capable of flashing using commonly available utilities?

and today I got this incredibly lame reply:

In Regards to Ticket x

Thank you for your query.

Please see the complete report below on the current situation.

To explain, customers who purchased the Tablet 6000 with the 2.1 version are currently unable to update the device to version 2.2. This is due to the lack of automatic update for this device. However, the disgo 2.1.1 update is available on the mydisgo.com website for these devices.

Stock of the Tablet 6000 which arrived to our warehouse after the initial shipment, were manually updated in-house to version 2.2.
This is the reason for the 2.2 spec as seen with the e-tailers.

Again, the update for customers with the 2.1 version is still ongoing as per the website notice. It is not possible for users to manually update the device due to the complicated procedure involved and the hardware involved to carry out this update.


Also, we are not at liberty to distribute ROMs in a soft state which can compromise the license agreements held with certain software vendors whose offerings constitute part of our ROM.

Which is all obviously nonsense as I already put a different 2.2 distro on there using the instructions on this forum.

Just got to try installing a standalone flash 10.1 for ArmV6 processors tonight and if that works I'm away.
F

I can't get google maps or navigation (came with the tablet) to work, maps just crashes on entry and navigation just can't find my location
You must log in or register to reply here.