RaVenJ said:
I'll try making some changes based on this, but.... Won't your suggestions end up making much larger files?
Click to expand...

My guess is "probably not". The only parameter that will have a direct effect (other than adding a few pixels to the width/height) is bitrate, and going from 900 to 1000 will probably have a small effect. If I had to guess, I'd estimate it would increase a 1GB file to maybe 1.2GB, but I suspect it'll depend a lot on the content (color, scene complexity, motion).

And now for a short sermon by Matt!

I've evolved a bit in my own thinking regarding compression (file size vs. bitrate) settings. For the longest time, I had a device (Archos 605) that I only fed DivX, so I ritualistically encoded each movie to 500MB (then 700MB...then 1GB...) using 2-pass encoding in AutoGK. Next came my Droid, and so I transcoded the DivX movies over to h.264. Given the 3.7" screen on the Droid, everything I transcoded played beautifully.

Along came the 7" screen on the Nook. Of course the first thing I did was copy over all the mp4's from my Droid to the Nook, and they were perfect too. But then the s*** hit the fan: I bought an h.264 capture device for my Dish DVR, and started capturing HD movies (either 4 or 8GB). I wondered how those would look on my gorgeous Nook screen, so I gave those to Handbrake and said, "HA!!! Try and transcode those!" and voila my "How-to" on this forum was born.

Using Handbrake, at first I did my ritualistic "everything at fixed filesize of 1GB" regardless of length or content. That felt stupid. So I started playing with the Constant Quality setting, and noticed something interesting (I have two kids by the way): because of the way backgrounds and textures are rendered in animated movies, using QC ended up with VERY COMPACT output...often 500-600MB and low bitrates. Non-action movies ended up around 700-800MB (depending on length) while several action movies (e.g., Harry Potter) ended up around 1GB and like markiej noted, maybe 900-1000 kbps bitrate. Like I noted in the How-to, there were some exceptions (e.g., Transformers 2 was gigantic...so I ended using a fixed bitrate on that).

OK, this wasn't short at all. Sorry! But I guess my point was that I've come around to using the QC setting (at 19 or 20) more, which is awesome insofar as it's 1 pass and often encodes faster than realtime...and occasionally use the fixed filesize or bitrate option on an as-needed basis. Of course I'm a control freak and want everyone to do what I do...but in all seriousness, please don't take it that way! Honestly, I just wanted to toss in my 2 cents fwiw.

I'll try making some changes based on this, but.... Won't your suggestions end up making much larger files?
Click to expand...

The main reason I use those values is that I use MPEG4 instead of h.264. Because it's much faster, and I've had less compatibility problems with it.

Has anyone used Freemake Video Converter? I have been using it and it seems pretty straight forward. It even has a preset for Android and Nook Color.

Wanna try and post some screenshots? All-in-one solutions are great! 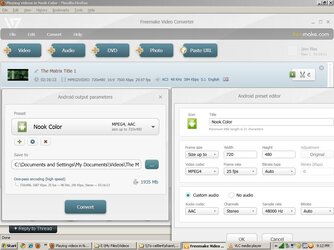 Okay I do like the all in one feature. I was able to rip and convert from a DVD in the drive. Also, it has the DVD/File settings so you know details of the file such as aspect ratio, fps, etc. You can either use MPEG4 or H.264. However, I haven't successfully used H.264. I tried with the matrix. It played on my laptop, but not on the NC.

Oh I forgot, you can preview as well.

Is it Freemake as in "free"?

gadgetrants said:
Wow, that looks seriously good! How did you find it? My theory is that Matrix didn't play because the bitrate was too high for the Nook. Can you pop it into Freemake and see if the bitrate shows up? I'm guessing it will be like 1200 or 1500 or 1800 Kbps. If the bitrate is too high on the h.264 videos I'd switch from "auto" to 800-1000 Kbps.

Is it Freemake as in "free"?

It looks like it was just added on 1/27/11 so it is new. I found it because DVD Shrink wasn't working for Shark Tales. It was too much for my processor. However, Freemake could handle it.

The bit rate for The Matrix is 1934 Kbps. So, from your comments that is too high for the NC.

Yes, it is Freeware.

I'm stoked as it seems like a great stand-alone solution. My only problem is I don't have a great DVD collection.

My next step is to try to play these converted videos from my networked hard drive to my Logitech Revue/Google TV. That would be pretty cool. I'm not sure if the technology is there yet.


EDIT: I'm not sure how new it is as it was reviewed back in December.

The streaming solution I'm using at the moment is a Win 7 PC that hosts the media files -> TVersity is the media streaming program on the PC -> and playback is on our TV through a PS3. Having an 802.11n router helps somewhat with the higher bitrate videos.

I re-rendered the HD version of Transformers using the suggested settings and the NC says it can't play it. I only changed what was suggested. Any thoughts? Going to try that Freemake thing tomorrow.. Looks very interesting.

Can you check the bitrate on the Transformers?...that's the likely culprit. Or more specifically, did you set the filesize, bitrate, or Constant Quality setting, and at what value?

I re-rendered the HD version of Transformers using the suggested settings and the NC says it can't play it.
Click to expand...


Just for kicks, try mpeg 4 instead of h.264 in handbrake. I've had 2 videos work with the former, and not the latter. I know h.264 is supported, so I'm not sure what hidden setting is killing it, but never had problems with mpeg4 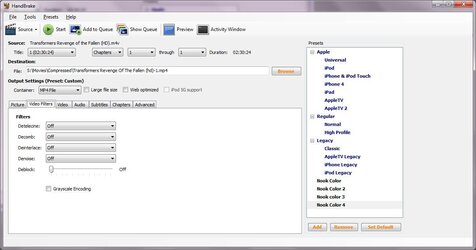 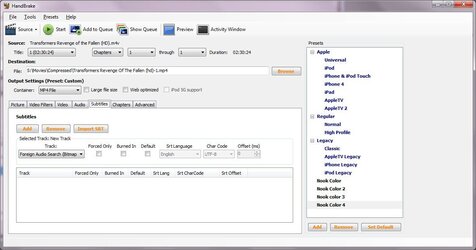 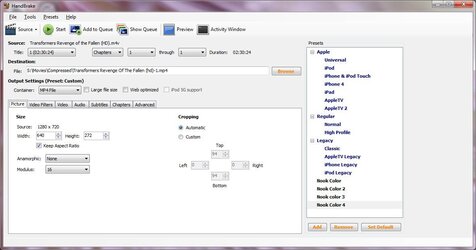 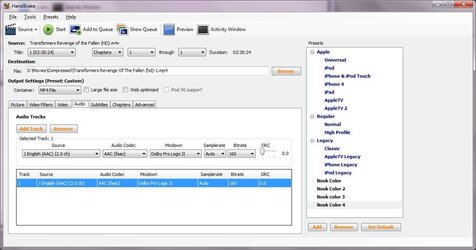 The only things I changed were the ones suggested. Here are my screens. 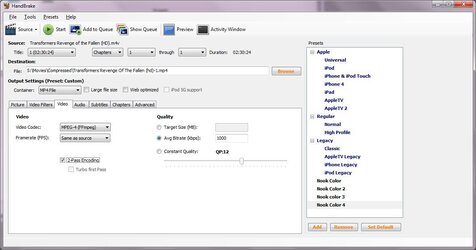 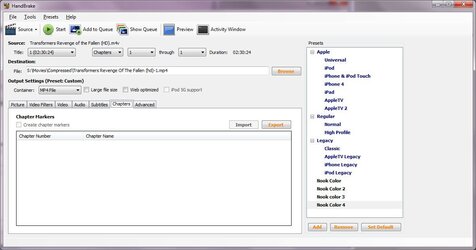 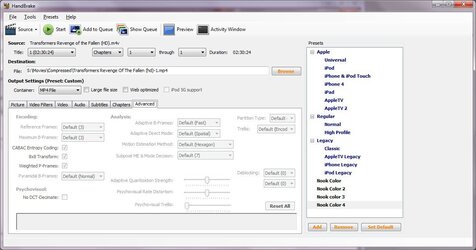 badly typed on, and sent from, my NC
N

Any thoughts for increasing the output volume either once a movie is on the NC or during conversion? I ripped and converted The Matrix and loaded it onto the NC. I can hear it, but the sound is low. My wife watched another movie today as she couldn't hear it over the plane noise.

I have thought that the volume level on the NC was low to begin with so I didn't know if there was a setting that I could change or conversion setting or tough luck.
You must log in or register to reply here.