As the name suggests - it&#8217;s just like rummy, except that in this game players have to form new words from the given open cards having alphabets. It can be played alone or the player can invite his/her online friend to play this Android game. At the same time, it can be played either online or offline, both.

A great initiative adding knowledge and vocabulary to your mental data bank! 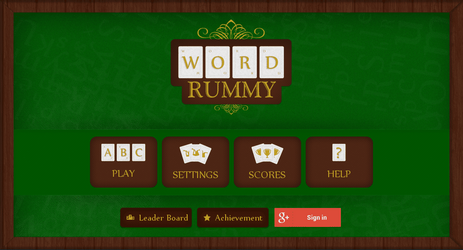 The player has to create meaningful and correct words using the displayed open cards. The player can flip, drag and place the right sequence of alphabets to make a word from the left side open cards panel!
For players&#8217; convenience &#8220;Hint&#8221; button is also provided to get clues for creating a word from the available open cards. Every alphabet will carry a separate value i.e., between 1-10, to calculate the difficulty level of the words created and accordingly providing scoring.

The game has two levels of difficulty with separate time limit, number of hints and bonus points for the winner of separate levels.

Players will get various scores based on specific scoring system!Real time play brings two options &#8211; &#8216;Auto Match&#8217; and &#8216;Invite and Select Opponent Manually&#8217;. There are several levels of achievement to rejoice for the players, which can be achieved at various stages of game on fulfilling specific conditions.

In addition, the bonus offering is - player can get incremental achievements based on the number of games they played.On playing 20 games, player will be called a "Freshman", on playing 50 games will win "Sophomore" status and on competing 150 games he/she would be crowned with the title of a "Graduate".

Now stay tuned with your FaceBook Connections in Word Rummy!
Facebook Sharing Features
​
So, are you eager to reach out the expert level of a Graduate? Try it out!!

Download Now: https://play.google.com/store/apps/details?id=com.biztech.wordrummy
​
Last edited by a moderator: Jul 11, 2014
You must log in or register to reply here.