Pocket-Lint.com reports:
Dell is to launch an Android-based tablet device, Pocket-lint has learnt, possibly beating the also rumoured Apple tablet to the market.

The new model, which will go up against the currently available Archos Internet Tablet and recently announced JooJoo (formerly the CrunchPad), will allow users to surf the Web from a handheld device bigger than a touchscreen smartphone, but smaller than a standard netbook.

Details so far are thin on the ground, but our multiple "black ops sources" tell us that it will feature a 5-inch screen, run the Android OS and be coming to the UK in the new year, with a more than likely announcement expected at CES 2010 in Las Vegas.

Dell is of course staying quiet on this, but did give us more than the standard no comment when we asked it for more details:

"Dell continually develops and tests new products that extend the mobile experience. We have not made any product announcements and do not comment on speculation, rumour, or unannounced products".

All these new AnDroid devices hitting the market, I am going to have to get a 2nd job just so I can play with them all.

I have a lotto ticket here,

Not a Winner, Yeah, maybe a 3rd job too 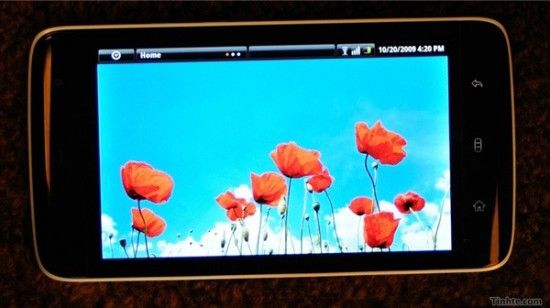 Engadget just posted pics of the new Dell Tablets. The article doesn't mention what OS the new tablets will be running, but I sure hope its android. They look awesome:

We'd heard through the grapevine that the engineers at Round Rock were working on a number of slates to fill the Streak lineup, but man, we didn't see this coming... at least not yet. A couple of images along with an internal Dell announcement landed on our virtual doorstep this fine morning, and lo and behold, it looks as if a 7-inch and 10-inch Streak tablet is on the horizon. But that's not all -- we learned that the "coming soon" we heard earlier regarding the Aero's release date on AT&T really means "June." Later this "summer," said phone will be joined by the Streak 5 (yeah, that's the Mini 5 we've had for months now) for those who prefer a more capable mobile. As for the 7-inch Streak? Look for it to launch (presumably with or without AT&T support) late in 2010, while a 10-inch flavor follows in "early 2011." Is Sidetalkin' really about to return? We're ready -- so ready.
Click to expand...

Dont call it a smartphone. Formerly referred to as the Mini 5, the upcoming Dell Streak is the ultimate portable tablet PC.


We were quite impressed with the specs of the Streak when Michael Dell showed it off in January, but dont expect this phone in the United States till later this summer. The Streak will ship first in June across the UK at O2 stores, Carphone Warehouse, and Dell.co.uk.


While it initially looked like a stellar device, the Streak has suffered the same fate as the Xperia X10. Both were revealed too early ahead of their U.S. launch dates and have been passed up by newer phones from HTC and Motorola. The current version of the Streak is still running Android 1.6 (like the X10), but Dell is expected to upgrade it to Android 2.2 and beyond later this year.


No carrier was officially announced for the U.S., but Mr. Dell himself said it was coming to AT&T and this was confirmed by a listing on the FCC site.

Here's what we know so far.

The Dell Streak has a 5-inch screen, a 1GHz Snapdragon processor, and 2 GB of internal storage (with support for up to 32 GB of additional SD storage). It has an earpiece on the top of its front side and a microphone on the bottom.

The Streak is shipping with Android 1.6 but will receive an over-the-air upgrade to Android 2.2 later this year.


Anyone plan on picking one of these up?

I like that device. I don't use my phone much and when I do, it is with a bluetooth. This would be perfect for me if they ever made a CDMA version. I refuse to go to AT&T for it.

At 5" the power and portability of the Dell Streak combines the best entertainment, social connectivity, and navigation on the go experience.

At 5" the power and portability of the Dell Streak combines the best entertainment, social connectivity, and navigation on the go experience.

5" is to small for me. the tablet I'm getting is 7" and even that may be to small

Still beta from the looks of it, but this is well on its way to be a solid device.

But this thing is too expensive right now. If it had Android 2.1 at least people would buy this. $549?


And a good review:
http://www.anandtech.com/show/3853/the-dell-streak-review

Dell is the famous brand these the dell tablet is also famous we can take this dell tablet inside the pocket because it is a pocket size and the business people take most interest in the dell tablet its size is perfect and it is completely touch pc.
You must log in or register to reply here.