It's in BETA - some things don't work yet. It will improve.

But the excitement! Yesterday, cas_xp created a thread at XDA Developers forum for the Gingerbread 2.3.6 CyanogenMod 7 for the Le Pan 1 (TC970).

All credit goes to cas_xp, fv+ and chinabull, who each contributed essential parts to get the project going. And it's pretty!! 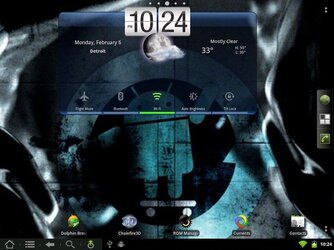 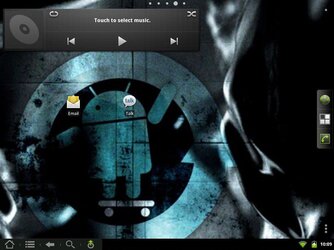 ^---- Click on the images for FULL size version; or click and see them here: desktop 1, desktop 2, system info - all snapshots courtesy of Bigtech113 at another forum.

It has been a while since I published the screenshot of gingerbread on TC970. Now you can flash it on your toy. But remember: I am not responsible on any damages it might cause although I have fully test it on my own.

Thanks chinabull for exploring the structure of griffin firmware and fv+ for wonderful tool to packer/unpacker custom firmware!

Procedure:
1) Download the griffin.zip (ClockWorkMod 5) and extract it to your SD card root folder.
2) Copy the update.zip to your SD card somewhere you will find it in recovery. [edit: updated to Beta 5 link]
3) Power on your tablet with Volume down + Power key and wait a while (5 seconds) then release those keys
4) Do a Nandroid backup first!!! (You can get official version back in anytime)
5) Flash the update.zip

PS: A lot of features are not working, like camera, audio etc. But at least WIFI and EGL are working. You can help to fix it.
Click to expand...

I installed it, and it runs smooth, it's a lot prettier than the Froyo op.system Matsunich says is all we can have. This proves them WRONG, lazy, and not caring to support us, who paid full asking price for their tablets.

As cas mentioned, this is very much a work in progress, some things don't work. Yet.

But I though anyone owning a LP1 would like to know Better Things are in the horizon. Hopefully soon, we will progress to more and more stable releases!

What do you all think?

Sound is now working, a new driver was released. There's different ways to install it - see post #17 (command line, adb install) and maybe post #21 (if you want to use an Update.zip or a full new ROM file with new driver included).

And it's getting better by the minute. cas_xp just posted at XDA Devs, he relased the Beta2. From the original post (top of the thread) :

Another Beta version is out for testing - things are getting better and better. From XDA Release thread, posted 3 pm today :

Welcome to report any issues except Camera and GPS.
Click to expand...

cas_xp released a small update file to solve the charging problem some people were suffering. Apply on top of your existing Beta 3 install.


cas_xp@XDA Developers said:
[Update] Mar 18. 2012
This is the fresh installation, so, backup first!!
Audio capture OK
Camera OK
Integrated with the latest Google play.
---------------- I have put device files into my github.com account, see my signature.
Camcorder is not working.
720P video playback not working
GPS not working
Click to expand...

** Install from ClockWorkMod as an update - NO need for backups or deleting Caches or Data.

Beta 6 file is pretty small as it's only an Update.

Install it on top of a working Beta 5.1 tablet. No need to backup things as the install will not delete any files.

Get the Beta 6 File (GPS enabled and working!) HERE.

This new Beta 6.1 is a complete ROM, and you MUST make a Backup if you want to keep your apps.

** Installation has to be done in a certain way **, this post is getting long - so See this post, here in this same thread, for FULL details, How To Install it and the Beta 6.1 File Download links.
Last edited: Sep 5, 2012

Thanks, Johna2u, it seems not many people cared about it, or knew what it meant - and I made a nice thread too.

For those that DO care, here's a perk :

The Beta of CyanogenMod 7 for the LP1 comes with the oh-very-cool skateboarding android, in cyan, of course.


I liked it, maybe other people might want it?


Placed a copy of it on a host account - Get CM7_bootanimation.zip HERE. (1.8 MB, direct download link, no waits.)


Don't forget to rename to bootanimation.zip before you copy it over to your tablet. Installing custom boot animations requires ROOT access.
B

Awesome job guys, almost makes we wish i ordered the Le Pan I instead and stuck it out! saves you money too!

This means a lot to me, I bought mine in December, so after Le Pan had reneged on their promise of a software upgrade for the LP1. Not as disappointed as someone who believed them - and for months Le Pan was touting possible ICS on lp1.

But the factory software is working but generally not pretty. Without rooting the tablet, a lot of things are not the best they could.

Installing CM7 will solve a lot of problems, it's pretty and faster than the Froyo factory release; it's put together by an experienced developers team, etc.

Looking forward to the next Betas, and eventually, a Stable release.

I recently bought an HP Thinkpad and plan to run it dual boot, with webOS 3 and CM9 Beta ICS. Reports from people doing that is that it runs excellent.
K

*head spinning* I think I should be excited for this as I did order the Le Pan I... Now I just need to learn what all of this means!!!! This is what I get for leaving the techy world behind 6 years ago! LOL

KnottyPanda said:
*head spinning* I think I should be excited for this as I did order the Le Pan I... Now I just need to learn what all of this means!!!!
Click to expand...

Yes, this is reason for major excitement for anyone who owns, or is even considering buying, a Le Pan 1/TC970.

It's like if you had bought a personal computer, and it's and sharp looking, but it's running Windows 98. Remember that?

Uhmm, it could be better, no? Yes, truly, the manufacturer agrees. They promise to have a new Windows for you, in a few months time, and you purchase the computer.

Bad news is, a few months later, the manufacturer stops talking about that upgrade in operating systems. When users ask directly, like people did at the Le Pan Support site, the manufacturer comes out and says, 'sorry. Bob, we can't do it. Microsoft just made that upgrade impossible.' Which is what Le pan, only blaming Google instead.

The Manufacturer them launches a new and flashier computer (the Le Pan II), which comes with a better operating system (Windows Vista in our analogy), and they promise an upgrade to an even better new operating system. Soon, you will have Windows 7, Joe!

How do you feel about it? You already shelled out for the only model they had available, no? Now, they want to cash in, and sell a more expensive model (which is pretty and a good deal) - but how about us, Le Pan 1 users? Out of luck, Bob.


Until NOW that is. The announcement of this Beta release of an upgraded operating system for our LP1 tablets would be equivalent to a hacker's group getting together and rolling their sleeves; working hard and bringing out a version of Windows XP, which the manufacturer KNOWS can run fine in your computer (in this case, it's the Gingerbread version of Android, 2.3 - it truly runs well on the LP1).

But the maunfacturer doesn't want to invest time and money, pay staff to develop the op. system for us - they say, you are fine and stay with Windows 98.

Not anymore - our friends at the XDA Developers forum are giving us what Le Pan doesn't care to do. A better O.S. for our devices.

Their version will also be more polished, professional and better performing than anything the small staff at Le Pan (Matsunich is the company name really) could do. I have a feeling their development team is VERY small.


KnottyPanda said:
This is what I get for leaving the techy world behind 6 years ago! LOL
Click to expand...

Don't feel bad, just jump in and read, learn - the Le Pan1 I bought on Boxing Day is my first ever Android device, and it's been fun learning about the system, how to tweak it so I can do things like I do in my Windows machines.

If you are a Power User, Rejoice.

Thanks, Brandon, people will like to see it.
B

Brandon good video thanks for the upload. What parts are not working? Audio camera?

keboobi said:
What parts are not working? Audio camera?
Click to expand...

- sound and camera not working.
- screen is upside down, so you need to work with tablet turned upside down; this places the hard buttons under you left hand, and leads to some accidental button pushing in my case. (this is going to be fixed soon, I bet)
- SD cards might or might not mount. So do, some don't; mine didn't, have seen posts of other whose cards did. The screnshots in the thread were taken and saved to a users SD card, for example.

That's all that I have noticed. Performance is definitively better than the stock Froyo factory firmware. It's also much nicer looking, and comes rooted by default.

Congratulations on the hard work guys! These victories are so exciting. Can't wait til more progress is made on the LPII.
Last edited: Feb 10, 2012

Thanks, John, I am having a great time with the tablets too.
B

the camera isnt working neither is audion, but wifi does and ever thing will he fixed over time

Sent from my SCH-I500 using Android Tablet Forum
You must log in or register to reply here.