This is my first post here, as I received my ePad this morning; I cannot give a model number or manufacturer as there is no information on the box or in the manual. All I can tell you that it is running Android 1.7.4 ...

The MID I received doesn't look exactly like the pictures on eBay (IMHO, it looks better) : The back of the casing is black, as is the button on the front. 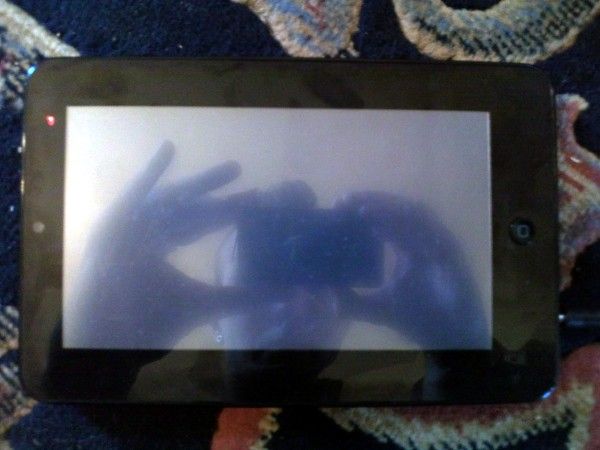 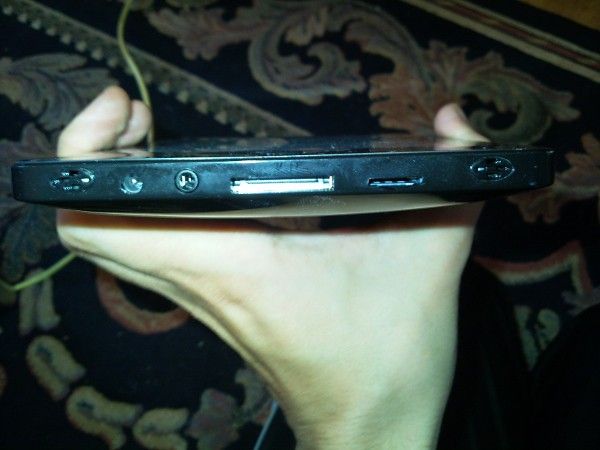 I picked up the package from the post office and took it into work, plugged it in to charge and turned it on ...

I played around with my new device for a little while and was impressed with how smooth and fast it was compared to the M001 owned by one of my friends. I was slightly concerned that it wouldn't connect to my office wifi, as it stopped detecting the network as soon as I entered the WPA key.

A couple of hours later, I was forced to return home in a hurry so attempted to switch off my new device. I chose the hibernate option by accident, but thought no more of it until I got home ...

Can I get the thing to boot back up? Can I hell!

At first, pressing the power button would simply turn on the green power light, but nothing else would happen. I pressed and held the power button for 5 seconds to do a hard shutdown (as explained in the manual) before turning it back on.

For a little while, screen would switch on, the device would quickly vibrate and then it would display the android logo. The progress bar at the bottom of the screen would scroll through once and stick with the indicator at the right hand side of the screen; this was as far as the boot up process would go. 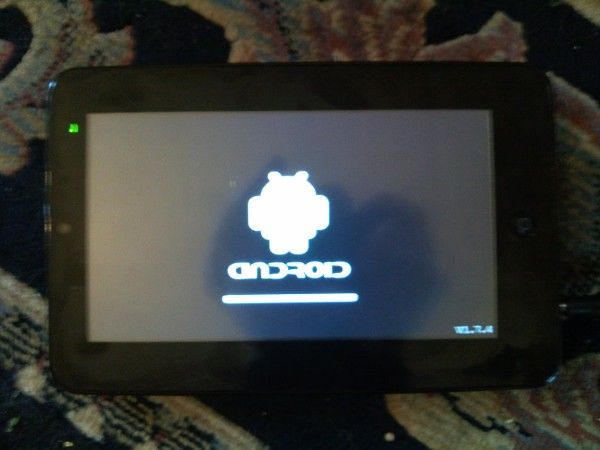 It didn't take long (4 or 5 restarts) before the device stopped doing that; now I am back to where I was at the start. Can anyone tell me how I might be able to sort this out? I don't want to have a $100 device for switching on a single LED.

(EDIT : It is switching on again now, but it still won't go past the android logo)
X

Hmmm... After searching in ebay i was going to buy this one. I know this is the obvious move but have you tried contacting the seller? I did see one seller saying that it does hang sometimes but he has a technique to recover it. I don't recall though which one was him... Please update if you had it fixed
X

It's not exactly the same one though but who knows, he might be able to help you.
G

The store that I have used is based in Hong Kong and all of my technical questions were ignored : the only solution that they offered is sending it back for a refund!

I have noticed an odd pattern in the device's behavior : If I plug in the charger and turn it on immediately, the ePad vibrates, the screen comes on, the android logo appears & the progress bar scrolls through once before the tablet freezes. Otherwise, I only get the green LED to show that I have done anything!

(EDIT : I have fully charged the battery, so I know that isn't the issue - once it has switched on, it stays on when I unplug it)

I have really been around the houses with trying to fix this thing, having flashed the device with 4 different firmware iterations today alone (returning to the original version in the end, just so that I can send it back if I need to).

Each time I have flashed the thing, it has told me that all of the updates have been applied successfully, then the progress bar appears and the device freezes.

Right now, I have it turned on (frozen on the splash screen) and unplugged so that I can try running down the battery. Maybe if I can exhaust the charge in the battery then the device might forget that I ever put it into hibernation ... it is a desperate move, but it is the last thing that I can think of doing before paying to ship it back to china!
Last edited: Jul 13, 2010
G

All I had to do was COMPLETELY drain the battery and now it is getting much further into the boot up process.

The scrollbar is still moving, but still no sign of my desktop after a few minutes of waiting.

Wow, the exact same thing happened to my pad this morning, after I changed my Google account it just reset.

I'll keep watching this thread, please let me know if you find any solutions.
G

I got it working in the end : my fix was only possible after I completely drained the battery.

I ran my pad until it wouldn't turn on, plugged it in and immediately switched it back on. As soon as the screen lit, I unplugged it and let it run down again.

After repeating a few times, it reached the point where it wouldn't even try to stay on without the charger plugged in.

At this point, I tried the flashing process with the original firmware and it went straight through without a hitch.

It seems that the internal memory requires battery power to retain the information about previous sessions. If that session is stored but corrupted then it won't be able to boot.

Draining the battery entirely appears to fix it.

I might be wrong about this, but it worked for me!
D

Dear Gridwalker.
This is digitalandroid.com
I am having issues with my log in hence the new id.
Now.
let me breifly explain this.
The Black model that you have purschased is made by a spoof factory, meaning it has copied the actual ePad- however such manufacturers will use inferior LCD, Batteries to make a quick buck.

What you need to do now is load the firmware.
I will not post the link to the firmware here- however the best thing to do is contact me via my email and I will give you a link to download the zip file.
and yes it will take 5 minutes to fix it I promise.
If it does not then the android tablet is faulty.

Most the sellers on ebay- who sell this dont even know what the product is, let alone trying to help a customer fix it ( forgot that they dont even know English)

In China getting an ebay account is like buying candy- not like USA or Au where you have to give your ID's etc...hence every **** opens a ebay account and with some photoshop knowledge - gets in business- making it sound as if they are a big enterprise however all most all of them are run out of a toilet- i mean that-

Not trying to scare any one- but thats the truth.
Sam
digitalandroid.com

Dear Xroad,
Your are a Champion,
Thanks for helping your forum mates,
I have replied to him and will fix his problem.

Just a note: there are a lot of spoofs out there and now there is a copy for the ROCK CHIPS that I sell- hence i am loosing business because the later is cheaper.
But then it doesnt even come close to my quality.
I have sold over 300 units now and not a single complaint - yes not a single complaint-
Just the odd one that internal antenna is loose- transit issue etc.

My epad will not update from sd card just displays android logo - any ideas ? have tried fully discharging battery
A

what update you mean?
the SCRIPT , or something else.
if Script (ROM), what version do you have?
D

Folks, I have the same issue, however the draining of the battery does not seem to help in my situation. The screen is still blank and the green light is on. I'm wondering if the there is a way to rewrite the ULOAD into the firmware. I suspect that during my last firmware upgrade my epad lost power, thus corrupting the loader code? Does anyone have any ideas on how to fix this issue.
E

Gridwalker said:
I got it working in the end : my fix was only possible after I completely drained the battery.

I ran my pad until it wouldn't turn on, plugged it in and immediately switched it back on. As soon as the screen lit, I unplugged it and let it run down again.

After repeating a few times, it reached the point where it wouldn't even try to stay on without the charger plugged in.

At this point, I tried the flashing process with the original firmware and it went straight through without a hitch.

It seems that the internal memory requires battery power to retain the information about previous sessions. If that session is stored but corrupted then it won't be able to boot.

Draining the battery entirely appears to fix it.

Which Firmware did you used?
I'm having the same problem, I've uncharged the battery at the point that only the android logo appears for a sec, and when I put the SD card for flashing, it's the same: I have a black screen.

If it won't update, one reason is that there was a delayed write that did not happen on the sd card. Make sure before removing the sd card, you safely remove the device. In Windows you have this option, in UNIX, to do this, click on the green eject screen on the left side of the Window. The same happened to me because I was just removing the sd card with the the "safely remove" procedure.
E

Is there a way to have a backup of all the apps I've installed and their config, so if this happen again I don't have to install it from zero over and over?
Last edited: Jul 25, 2010
You must log in or register to reply here.